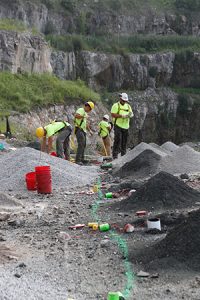 The physics of how rock gets broken is the same as it was over a hundred years ago when Alfred Nobel perfected the use of nitroglycerine as an explosive upon his invention of dynamite.

The application of those principles has been evolving ever since through determination, sweat and technology. The art of the blast is still a relative term and it still takes a special breed to perform this necessary service. Just as in all industries and disciplines in which you can teach the technical steps and actions — there are those who have an intuitive understanding of how things work.

Such was the case with Ted Purington, Sr. when he and his wife Judy founded Maine Drilling & Blasting in 1966. With a $2000 loan and sheer determination they began in the kitchen of their farmhouse in Gardiner, ME. Since then Maine Drilling & Blasting (MD&B) has grown from a family-owned company to an employee-owned company with operations covering the northeast and mid-Atlantic servicing the needs of the construction, mine and quarry sectors. In addition to drilling and blasting, MD&B offers hoe ramming, rock bolting and micropiles.

At their seasonal peak, MD&B’s workforce can reach approximately 430 employees. Of those, roughly 125 are dedicated to the quarry division, which was developed in the mid 1980s to focus on the disciplines of quarry blasting. Today, the quarry division represents about 40 percent of Maine Drilling & Blasting’s revenue stream by servicing over 180 quarries across 10 states, in pits ranging in production from 10,000 to 1.5 million tons per year. Most of the drilling and blasting is done in the aggregate and light aggregate sectors, with some in the mineral sector.

Celebrating 50 years in business in 2016, MD&B has executed over two million controlled blasts during their tenure. Corporate headquarters are still in Gardiner, ME, although decisions today are made around the conference table instead of the kitchen table.

Mitch Green, senior vice president, explained that today Maine Drilling & Blasting’s ability “to provide a turnkey quarry operation which includes a vertically integrated drilling and blasting platform, as well as 100 percent crushable service is an important differentiator from our more traditional competitors. Add our quarry planning and our technology capabilities to that, and Maine Drilling & Blasting offers a true partnership.” Green went on to point out that MD&B is a solutions-driven company. Having diverse resources in drilling, blasting, engineering and education brings the proper application to a quarry’s problem providing the right solution.

Among the tangible resources at their disposal is their fleet of around 100 drills and 65 pieces of rolling stock, represented by bulk trucks for the pumping of emulsion.

Maine Drilling & Blasting’s fleet of hydraulic equipment is complimented by their strategic alliance with Atlas Copco. This alliance introduces MD&B to innovative technology before it is released to the general market, giving them the edge. This edge began in 1987 and carried into the 1990s when MD&B jumped into using hydraulic drilling rigs when other drilling and blasting outfits were hesitant to make the change.

Todd Barrett, another senior vice president explained part of their relationship with Atlas Copco is working together to develop the drilling technology that fits MD&B’s needs. They test technologies that Atlas Copco thinks the industry needs or wants and then MD&B provides honest feedback to create a better drill — which only enhances their edge.

When asked how bore tracking and laser profiling were incorporated into a job by the individual teams, Barrett responded by saying that those features were utilized as a safety check. First by helping the team to see what the face burden is as drilled versus their blast design, and second it is a way to optimize the blast design. He went on to say, “Understanding where to place the explosives in our face holes — through technology — often confirms what a blaster is seeing. However, sometimes that technology directs the blaster to make adjustments, which provide the optimum blast and safety results required by the customer.”

The customer in this case is Aggregate Industries — Littleton, MA Quarry, where we were given an insider’s view to the art of the blast during a recent blast. The quarry is a substantial ready mix concrete supplier due to its production levels and proximity to the greater Boston area.

The quarry’s footprint is approximately 85 acres and is surrounded on all sides by neighborhoods and businesses, with some houses within 600 feet of production blast levels.

According to Pete Bennett, divisional manager, New England Quarry — South, MD&B is about to start blasting in the new ramp for the next bench level, which is approximately 150 feet below the original production level at the quarry.

As explained by Bennett, MD&B partners with the quarry — evaluating a number of different blast designs and receiving input from the face loader operators in order to make adjustments and improve digging and overall cost per ton for the operation.

MD&B’s Lead Blasting Supervisor at the Littleton, MA Quarry, Blake Kerrigan works closely with Dave Schofield, the AI quarry manager. Together they determine the amount of rock that needs to be produced. This is accomplished by discussing the quarry’s upcoming sales forecast and resulting crushing schedule.

Bennett explained that MD&B keeps a drill and operator busy throughout the season at the Littleton, MA Quarry. Kerrigan and Schofield work well together to plan for sequencing benches that allow the driller to be productive and the quarry to stay on schedule for their crushing needs. Bennett continued, “The day prior to the blast, we notify a third party seismic consultant that will set seismographs at nearby structures for the blast, and we also let the local fire department know that we will be shooting the next day. On shot day, Blake manages the entire blast crew and directs the loading of explosives through use of a morning Pre-Task Analysis, which addresses specific hazards that the crew may encounter on shot day. Roles are assigned and the loading process begins. Adhering to industry best practices, and a learned knowledge of the quarry, Blake has directed the safe and successful detonation of hundreds of blasts over the past five years.”

Currently, the construction sector in general is experiencing a shortage of qualified workers and businesses may wonder about their own sustainability. Not so for Maine Drilling & Blasting. They actively seek, recruit and train high-potential employees that have the ability to go beyond entry-level positions. Barrett commented that people are the key to their business. He said that equipment can be purchased, but people need to be trained and cultivated with the right skills and core competencies to be successful.

The common goal is for employee safety, public safety and customer safety.

Werner explains today’s viewpoint. “What we do is a risky business and we have to be that much better than everybody else. We are always raising our bar, raising our standard to be a leader.” This focus for MD&B applies to both the safety industry and the drilling and blasting industry.