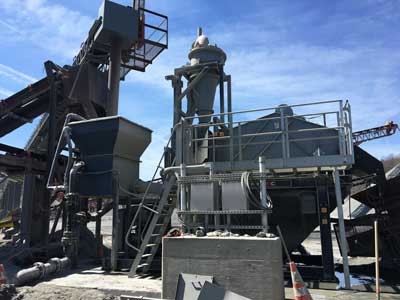 H&K acquired Birdsboro Materials in late 2000 and since then have turned the fledgling quarry into one of their most successful and profitable quarries in the region producing 2.5 million tons of material per annum. Birdsboro Materials is equipped with a state-of-the-art railroad loading equipment that services a private rail line running to the quarry. The rail line provides the capability to transport bulk crushed stone to a variety of locations in the mid-Atlantic region at competitive prices. The trap-rock quarry produces a variety of crushed stone products, including 2A and 2B material as well as railroad ballast.

Like many quarries, Birdsboro Materials had a limited market for dry screenings. More than 150,000 tons had been accumulated on site over several years. The screenings stockpile was taking up valuable space on the quarry floor and was costing money rather than generating revenue.

H&K realized that washing the screenings to produce saleable spec sand was the answer but did not want the financial implication of settling ponds to recirculate the dirty water that a wet process would generate.

After consolidation with long time partner Emerald Equipment Systems, a fines wash plant with a closed loop water management system was designed with the key objectives of minimizing water usage and producing a dry product that could be loaded onto the rail cars with minimum water content.

“Our vision of this project was to cut down on the #200 particle size in our AASHTO #10 product and keep a consistent gradation. We struggled to do so with our dry application. The turnkey project supplied by Emerald has been a success from start to finish,” says Pep Hunsicker of H&K Group, Inc.

The Plant
The plant design incorporated a Terex Washing Systems (TWS) Finesmaster and a Matec water management system with a plate press.

A custom designed boiler box was installed to accept feed from various dry sources at the plant before entering the Finesmaster. The boiler box adds approximately 1000gpm to the dry screenings, turning it into a slurry mixture before entering the Finesmaster. The slurry mixture gravity flows into the sump of the Finesmaster 120 and is then pumped up to the hydrocylone where the mixture is cut at 200mesh. The saleable product discharges though the spigot of the hydrocylone and onto the dewatering screen to remove excess moisture before being stockpiled.

The sand contains less than 12 percent moisture, which allows it to be used immediately either in the asphalt plant or trucked out to customers. The wastewater and material below 200mesh exit through the vortex finder and is gravity fed to the slurry pit for the next stage of processing. It is pumped from the pit into the deep cone silo where the separation of mud and water occurs. The waste water pipe is injected with a flocculent (biodegradable polyelectrolyte) before it enters the top of the silo; directly before entering the tank, a sample of the waste water is tested with the DOSON system to ensure the correct separation is taking place in order to achieve fast settling times inside the silo. The DOSON will automatically adjust the quantity of flocculant depending on the required settlement rate to ensure consistent density and regular mud discharge.

The deep cone silo (which does not contain any moving parts) is constructed in stainless steel. The pre-flocculated slurry expedites the separation of the mud and water inside the tank

The flocculated sludge falls down into the cone section of the tank where it remains for a short period of time until it reaches a preset thickness. The design of the deep cone ensures the weight and volume of the water overhead expedites the thickening process without adding additional flocculant. Afterward, the sludge gravity discharges into the homogenizing tank before being pumped to the filter press.

The plate press is 1.3×1.3 containing 100 plates and produces approximately 10 ton per cycle of dry mud cakes. The entire plant including the press is fully automatic and will switch on or off when there is sufficient mud to process.

The mud pump is a HPT (high pressure) 2-stage which allows mud pumping and filtering within one component. The plate press closes and the thickened sludge is pumped up and into the chambers; once the pump detects that all the chambers are full, the pressure changes and the filtering process begins.

The filtering process forces the water in the sludge through cloths on the plates and out into the filtering trays. When all of the water has been expelled from the mud, the press opens discharging dry mud cakes. The TT2Fast opening system has been installed which expedites the opening and closing of the press resulting in more cycle times per hour.