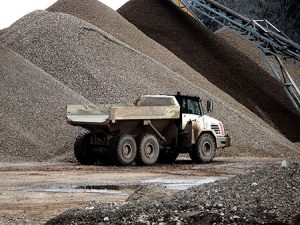 For quarry and sand and gravel plant operators who receive regular Fatalgram postings from MSHA, they are familiar with the dangers of working near or around a highwall. It is a cause for continual safety oversight. In the first quarter of 2017, there were three fatalities in the Metal-Non-Metal industry segment, two of which were due to workers being struck or buried by material. In the coal segment of the mining industry, there were five fatalities, two of which were highwall or roof fall related. In either segment of the industry, falling rock or shifting sand is a major safety concern.

Highlighting this critically important issue, MSHA Civil Engineer, Eric Gottheld, outlined highwall hazards in quarries and what to watch for in slope stability at sand and gravel mines, at the 2017 Northeast Mine Safety & Health Conference in Columbus, OH earlier this year. Gottheld’s objectives were to provide an understanding of how ground control hazards are created, how to recognize them and how to correct them. He said ground control hazards are usually created when workers are exposed to highwalls and pit walls in rock quarries or when they are exposed to banks or slopes with the potential for failure in sand and gravel pits. In either case, the exposure to these hazards can come from above or below.

Gottheld said that eliminating hazards is a primary method for reducing the number of incidents that could take place. First, he said companies should establish mining methods that maintain highwall stability. This can be done through thoughtful planning, evaluation and quarry design. Next, supervisors need to recognize the hazardous conditions through regular examinations of the worksite. Inspections should include changes in the geology and ground conditions, water seepage, the pit wall geometry, rock mass composition and potential failure modes that would result in a rock fall.

The third step to remediate a hazardous situation is through corrective measures that either prevents a failure or that prevent a worker’s exposure to the hazard. Finally, when preventing the worker’s exposure, Gottheld said some of the options would include relocating a work area, erecting barriers, installing other protective measures or regular monitoring of conditions.

Focusing on highwall stability, Gottheld said that highwalls are composed of rock masses consisting of blocks of intact rock that are separated by structural discontinuities. He said highwalls generally fail along these structural discontinuities. These include joints, cracks, sloping bedding planes and other anomalies. He added that the orientation and location of these fracture planes determine the type and extent of the rock failure and the path it will take.

Some of the properties of these discontinuities that play a role in how secure the highwall might be include their orientation, their spacing, how rough the surface is and how persistent the problem is. They also include the roughness, the aperture (opening) of the cracking, infilling of areas, and water seepage. He said discontinuities can occur at virtually any orientation and spacing. The way these conditions intersect one another and the highwall face, contribute to the potential for, and kind of, failure that might happen. These failures take place in various forms including circular, wedge, planar and toppling.

Gottheld noted that there are a number of ways to correct these situations. Stabilization (preventing failure) and protection (preventing exposure) are the two general methods. Stabilizing methods include reinforcement and rock removal. Reinforcement can be done with bolting, dowels, shot-in-place buttress, drainage, tie back walls and standard buttresses. Rock removal consists of re-sloping, trimming or scaling.

Meanwhile, protection measures to take to help eliminate the exposure include ditches and berms, mesh, catch fences, tunnels, rock shed, warning fences and the use of radio controlled equipment such as front end loaders and haul trucks. These can be permanent or temporary depending on the need. Rock of any size can be a problem.

Gottheld emphasized that a worker’s reaction time when they perceive a potential rock impact is very small. This time depends on a number of factors. Worker’s attention, visual acuity, decision making complexities, the time of day, worker fatigue, age and other issues all can play a part in an injury from falling rock. He said that considerable computer modeling has taken place to provide data to support ways that operators can make corrective measures that will improve safety conditions.

Factors that are unique to sand and gravel mining not only include the material that is mined, but also the methods that are used to mine it. “Sand and gravel is a sediment that generally consists of an un-bonded mixture of solid particles that is much weaker than rock,” he said. “Since it is weaker than rock, you don’t need to blast it and it is either direct excavated or by dredging.”

Direct excavation is where a loader simply works along a wall or surface, scooping up material and dumping it in a haul truck, onto a conveyor or directly into a screen plant of some kind. The concern here is when an excavator is working at the base of a wall that becomes unstable when the equipment is near the face. Steep excavations that are greater than the angle of repose of the material, is a major source of failure. In sand and gravel mines, the ways that operators control how hazards are created and how these hazards can be eliminated, is critical.

Eliminating slope failure in sand and gravel plants begins with establishing mining methods that maintain stability at the work face. Planning, evaluation and design go a long way to beginning the process. Recognizing hazardous conditions is next. Regular examinations that watch for changing soil composition, weak layers, seepage, potential failure modes and maintaining a safe slope angle are ways to see a problem in the making. Taking care of the problem with corrective measures can possibly correct the problem before the work site needs to be relocated. Preventing the exposure with barriers, monitoring or other protective measures are ways to take action as well.

Gottheld offered considerably more detailed information on the science behind these recommendations. He noted that additional information and assistance with safety planning is available through the miner’s local MSHA office or by contacting MSHA’s Stan Michalek, chief of the Mine Waste and Geotechnical Engineering Division at the Pittsburgh Safety and Health Technology Center at 412-386-6974.