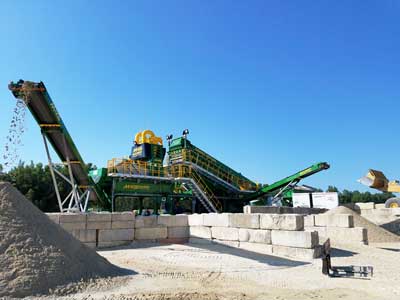 The large pile of byproduct sat in the corner waiting to be sold, though not at a profit. The goal of H&H Stone LLC, located in Bolingbrook, IL, was to simply sell the byproduct as fill even though they knew they would not break even on it.

Then in May of 2017, H&H Stone began using the McCloskey SandStorm 620 3D1S. According to Dave Hamman, owner of H&H Stone, “It has turned the byproduct into a profitable item.”

Hamman has been in the mining business since the mid 1970’s, and he followed his father into the industry. Over the years, the Hamman family has had a limestone quarry and a sand and gravel operation in Kendall County, and more. The entity known as H&H Stone began in 2013. At that time, Hamman and a partner purchased the limestone quarry in Bolingbrook and a sand and gravel pit in Boone County, IL. The purchase was from an old Chicago mining family that was selling off its entities.

The facility in Bolingbrook, which employs 11-12 people including crushing personnel and drillers, makes a high quality sand product out of a waste byproduct by wet screening all of the plus 4mesh off the top of the sand product, then using cyclones to wash out the silts and clays from the bottom end of the sand product. They end up with a spec sand product used in concrete manufacturing. According to Hamman, “Some farmers put it on fields to control the pH level. But in our area, due to the lack of farmland, we wash it and use it for manufacturing.”

H&H Stone’s industry is very much tied to the economy, particularly real estate. When the economy tanked in 2007-08, the Bolingbrook facility was shut down. Hamman and his team reopened the quarry in September of 2014. The materials from the Bolingbrook plant are sold to either ready mix companies or precast companies. The ready mix companies use it for foundations in homes and driveways while the precast companies use it to manufacture precast panels for distribution centers and other precast buildings..

With the American economy humming along, business has improved for H&H Stone. Challenges, however, remain. Hamman cites two challenges in particular that he and H&H Stone face. “The Illinois economy has not recovered fully – it’s way behind the rest of the nation.” In addition, the material the quarry produces is relatively low priced, so there’s a limit on how far it can be shipped. Also, margins are low and like every other business/industry, there is competition.

So, how does H&H Stone rise above the challenges? It’s about cleanliness. “I went to customers and told them ‘I have a good clean product that is affordable,’” said Hamman. The product that H&H Stone produces is cleaner than that of his competition. “They [the competition] are trying to do the same thing we do but with older technology, so they end up with material that is usable but not for all applications.”

Over the years, Hamman has rented various pieces of McCloskey equipment, including crushers and dry screening plants but never owned any. That all changed when McCloskey representative Craig Rautiola met with Hamman at the end of 2016. When Hamman met with Rautiola, “I gave him samples of my raw materials and told him the cleanliness level I needed on the finished product. He guaranteed he could produce materials as clean as I requested.” That guarantee is what ultimately convinced Hamman to buy the SandStorm 620 3D1S plant.

Prior to being delivered to H&H, the SandStorm 620 3D1S was put on display at CONEXPO in Las Vegas in March of 2017. From there it was moved to H&H Stone’s quarry in Bolingbrook. Hamman commented, “Building a traditional wash plant on site takes longer and is more expensive. This plant was built in a factory and therefore was easy to get up and running. They hauled it in in trucks and set it up in less than a week.” The delivery was in May of 2017, and the equipment has been up and running since.

The SandStorm 620 3D1S has delivered on Rautiola’s promise. Hamman said, “I’m very satisfied. It’s doing an excellent job, better than any type of equipment I’ve used in the past.” Billed as a modular, mobile wash plant, the SandStorm 620 3D1S is 148 feet in length, 111.5 feet in width and 26 feet in height according to the specs. Hamman appreciates the size, “It’s relatively small.” The mobility of the equipment — which he explained is part of the reason H&H Stone bought it — gives the company the option to move it. Hamman said they might consider doing that some day.

One crucial component of the equipment is its speed. “It’s about tons per hour, and we are very satisfied with its production,” said Hamman. The Sandstorm 620 can produce up to four wash products at once. It’s both powerful and durable and offers a variable speed belt feeder and an adjustable hopper door for consistent material feed and has dual and single sand options for up to for up to 400 tons per hour.

According to Hamman, the SandStorm 620 is also operator friendly. He points to the fact that it is touchscreen operated as proof of this. The fully automated machine is radio controlled and has an advanced automated control system. This makes it easy to use. Other features about the SandStorm 620 that Hamman appreciates are that it is a, “very quiet and clean plant and has very little spillage.”

When making a major purchase, such as the one for the SandStorm, relationships come into play. After all, challenges are bound to occur and it’s then that people want to work with others whom they are comfortable with and respect. “They [McCloskey] have addressed all of our issues and have been there when we needed them,” said Hamman.

In addition to simply being there, Hamman remarked the McCloskey people are “cordial, easy to work with and nice people to do business with.” Business does not end at 5:00 either. “The McCloskey rep who oversaw the set-up gave me his home number,” said Hamman. But Hamman has never had to use Rautiola’s home number. “He always answers his cell phone.”

These days the pile of byproduct is being sold instead of piled After all, it’s now a moneymaker and helps H&H Stone and the Hamman family continue to prosper in the business of mining.