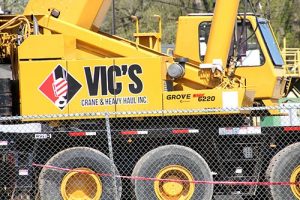 When Seneca Foods needed to remove an old boiler through the roof and replace it with a new one weighing 100,000-pounds at its Rochester, MN plant, the logistics and crane work were subcontracted to Vic’s Crane & Heavy Haul of Rosemount, MN. Vic’s chose its largest crane for the job, their Terex/Demag CC-2800 lattice boom crawler crane, which is rated at 660 tons. This machine is also the largest crane based in Minnasota, as well as in the Upper Midwest.

For the initial “pick,” and its replacement with the new boiler, the lattice boom crane would need to reach over the outside wall, far inside the facility, at a 280-foot radius from the crane to the center of the boiler, so the 100,000-pound weight of the new boiler would be far from the crane’s center of gravity. In preparation for this lift, Vic’s trucked close to a million pounds of counterweights to the site from their home base near the Twin Cities: 398,000-pounds of superstructure counterweights were placed on the machine; 120,000-pounds of car body counterweights were hung between the tracks; and an additional 440,000-pounds were stacked on the Superlift tray on the back.

“We tend to get the toughest crane jobs,” commented Mark Brouwer, Heavy Lift superintendent for Vic’s. Vic’s gives rental customers a choice of 36 different crane models, with multiples of 17 of them, but Brouwer says the Terex/Demag CC-2800 is “in a class by itself!” The tip of its main boom reaches to 315-feet, and an extension was added for the long reach into the building. With maximum extensions, the boom can have a tip height of 550-feet.

“The hook on this crane alone weighs 26,000-pounds, and uses the load lock weight just to keep the cables tight,” he continued. The tracks weigh 106,000-pounds and the superstructure house weighs 105,000-pounds, so this is a large crane to assemble. The crane was hauled to the Seneca Foods site in sections, and took a week to assemble in a configuration suitable to the site and the job to be done. The assembly was assisted by the lifting power one of Vic’s Grove hydraulic truck cranes, a GMK 6220, rated at 220 tons.

Fifty-five semi loads were required to haul the Terex/Demag CC2800’s crane sections, the counterweights, and other related equipment to the site. The heavy lifts, the roof replacement, and other work accomplished with the huge crane at Seneca Foods took two weeks. For the job, Vic’s supplied an experienced crew, including an operator; an “oiler” (who was only onsite for lifts and was in charge of lift safety, also served as a backup operator); certified riggers; an ironworker; and two operators for the Grove GMK 6220 truck crane, which assembled the Terex/Demag, and added and removed its counterweights as needed.

Between lifts, Vic’s supplied mechanics from its home base in Rosemount, MN to take care of manufacturer specified maintenance. Vic’s also performed the heavy haul of the 100,000-pound boiler to the site on a specialty lowboy trailer. Because of careful preplanning by Vic’s experienced staff, the job went smoothly.

During the same time period, Vic’s also supplied an additional 550 Ton capacity Grove GMK 7550 hydraulic all terrain crane, to dismantle two tower cranes that had been working in town on a large addition to the Mayo Clinic owned St. Mary’s Hospital. These cranes were to be moved to other jobs, but would later return to finish work on the hospital addition.

The single heaviest lift ever accomplished by Vic’s in its 65 years in business took place in 2016 in East Dubuque, IL. This lift was accomplished in two parts, making use of the same mammoth Terex/Demag CC-2800 used at Seneca Foods, a second Terex/Demag, and Vic’s four point gantry system. First the four point gantry lifted a 702,450-pound ammonia converter vessel from its railroad transport onto Vic’s long Goldhofer trailer at the edge of company property.

The Goldhofer, resembling a long, resilient caterpillar with its 20 axles each supported by eight wheels, spread out the weight of the heavy load so it could be safely hauled to its destination at the fertilizer plant. Considerable logistical preplanning needed to be done to ensure its safe ride over culverts and bridges. Vic’s engineers are skilled at such preplanning.

The ammonia converter vessel had made a long journey to the East Dubuque fertilizer plant. Manufactured in Italy, the heavy vessel was shipped to the US, then traveled by rail to the property of CVR Partners LP — Nitrogen Fertilizer LLS, the purchaser.

When the 702,450-pound vessel was finally vertical, the larger Terex/Demag CC- 2800 took over the job. Working alone, the huge crane slowly lowered the vessel into its base.

A tremendous lift had been completed safely, (and coordinated with other projects, several of which involved lifts of 100,000- to 152,000-pounds), due to Vic’s meticulous preplanning and well honed teamwork. Eighty-five semis had hauled the two cranes and their equipment, plus the gantry system to the company site, where Vic’s had assembled all in two weeks’ time.

Although they are not used as frequently as some of the other cranes in Vic’s fleet, these two Terex/Demags, along with lighter duty lattice boom crawler cranes like Vic’s multiple Manitowoc 2250’s, play an essential part in their business. “The lattice boom crawler cranes do specific, specialty work,” explained Brouwer. They are needed for jobs that call for long reach, heavy lifts. For refinery work, in power plants, and in the very busy iron mines in the Iron Range area in northern Minnesota, these cranes are indispensable.

Vic’s also used a lattice boom crawler crane, one of its Manitowoc 2250’s which can lift 300 tons, for a long reach into a Wisconsin paper plant to remove an aging paper press and replace it with a new one.

When new power producing windmills, which dot the landscape of the windswept Upper Midwest, need to be erected, or existing windmills need repairs, Vic’s hauls one of its lattice boom crawler cranes to the site. These tall cranes, including the Manitowoc 2250’s with a 350-foot main boom plus an additional 120-foot luffing jib, can easily reach the blades and motors of the windmills and lower them to the ground for repairs.

For jobs that don’t require the heavy lifting of the Terex/Demags, or the necessity to reconfigure the crane to the specific job and jobsite, the Manitowoc lattice boom crawlers can do similar work and are much simpler to haul and assemble. The Manitowoc 2250, for example, can be moved using “only” 20 semis. At the site, it can be self-erected in 10 hours. At the end of the job, this crane folds itself up again in about 10 hours, ready for trucking.