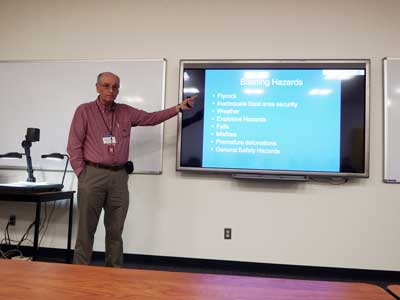 More than 175 members of the drilling and blasting industry spent January 17 and 18 at the National Mine Health and Safety Academy near Beckley, WV at the 2018 Mine Blasting Safety and Application Seminar. With more than one dozen industry experts offering seminars on a number of issues affecting drilling, blasting and mine safety, attendees were able to schedule attending nearly all of the sessions over the two-day event.

Focusing on ground control safety and drilling hazard awareness, two presenters highlighted areas of importance regarding these two general safety topics. First, Roger E. Montali, MSHA inspector and instructor, gave a brief overview of a recent publication, the Ground Control M/NM & Coal Mine Entry Level booklet, one of the teaching tools for the Course Instruction Series for MSHA. This 2017 publication serves as not only a teaching tool, but also a handy resource for drillers and blasters as they go about their daily routines.

Later on the 18th, a presentation by Vernon Harris, a veteran mine inspector for the Virginia Department of Mines, Minerals and Energy, focused on drilling and blasting hazards and the importance of being mindful of all the various aspects of the job that could prove harmful or even deadly. Harris elaborated on several, routine, daily tasks, that when not approached with safety in mind, could result in major drilling or blasting accidents.

Montali began by handing out a copy of the training manual to each class participant. He then gave an overview on Ground Control regulations for surface, metal/non-metal mines found in the 30 CFR Part 56 codes, especially those in Sub-Part B 56-3000. He also touched on the similar surface coal mining regulations found in Sub-Part K 77-1000.

Montali said drillers and blasters need to be especially mindful of wall, bank and slope stability as they go about their activities working near the face of the rock or atop material benches. Keeping benches clean and clear of loose material, both on the bench and near the working face, will help prevent rock fall accidents. This is especially true at or near the perimeter of the quarry where unconsolidated material needs to be sloped to the angle of repose for that material. When appropriate, the overburden should be sloped at least 10 feet from the top of the pit or quarry wall.

Montali gave examples of previous experiences where he was required to give citations while acting as an inspector. He emphasized that not only are quarry employees responsible for safe work habits, but contractors and sub-contractors are as well. In the event of safety violations, Montali said an MSHA inspector will write citations for each person involved in the unsafe behavior and the companies involved will also receive citations. He suggested carrying the text book he handed out, in the cab of the worker’s pickup truck as a quick, reliable reference. He noted that MSHA inspectors use these materials as guidelines for observing safety violations.

Citing precaution examples from the Program Policy Manual, sections 56.3401 and 56.3430, Montali noted that the mine operator must designate experienced supervisors or other miners, to examine and test for loose ground where applicable. These instances include where work is to be performed, before and after blasting and in other instances where unstable ground might be an issue. Highwalls and travel ways should be examined at least weekly depending on the need. (PPM 56&57.3401).

Workers shall not work or travel between equipment or machinery and the high wall, especially where the equipment would prevent the worker’s escape from a situation where material falls or slides from the highwall or bank. This applies to surface mines and surface areas of underground mines as well. If the machine or equipment should become disabled near a highwall or bank, the operator is permitted to enter or exit the equipment between the highwall and the device, when it becomes necessary to reposition or move the equipment for repairs. If it is not removed for repairs, it must be re-positioned to a place where the workers will not be endangered by rock falls (PPM 56.3430).

Vernon Harris presented a more detailed look at how to mitigate hazards, both in the drilling aspect of the process as well as the blasting portion. He said that hazards can be readily identified through proper training and by using the experience of miners and supervisors who have demonstrated ongoing safety awareness. He said this can be done with regular workplace examinations by miners and supervisors. He added that a thorough pre-op inspection of mobile and stationary equipment by their respective operators would also help detect those issues. Harris noted that a thorough examination of tools and associated work materials is also a part of the overall process.

Drilling hazards include ground control conditions, rotating machinery and fall hazards. They also include health hazard considerations like dust and noise. Other equipment hazards and general work safety situations are also areas where attention needs to be given in a conscientious manner. He gave an example of a fatality where a service technician was fatally injured while refueling a track-mounted drill rig. Even simple, daily tasks can be deadly, if not performed with safety in mind.

Harris said there are a number of blasting-related hazards that need to be considered. These include flyrock and inadequate blast area security. He used the example of how a company may have set up a protective area of security for the blast site, with proper distances surrounding the blast. As the drilling and blasting work moves along the working face of the bench, the miners need to remember to move the perimeters accordingly so that the blast doesn’t move too closely to one side of the secured area or the other. Forgetting to move the perimeter can result in the blast creating flyrock that could damage property or injure or kill people who have become too close to the blast unintentionally. Other forms of blasting hazards include weather, fall, misfires, premature detonations and general safety hazards similar to those on the drilling side of the operation.

Harris said that improvements in drilling and blasting technology have helped considerably to reduce the number of fatalities and injuries in these areas. Better-equipped drill rigs, electronic blasting equipment, are just two ways that workers can perform their duties more safely. “Misfires and premature detonations have gone way down,” he said. “That’s a good thing.”