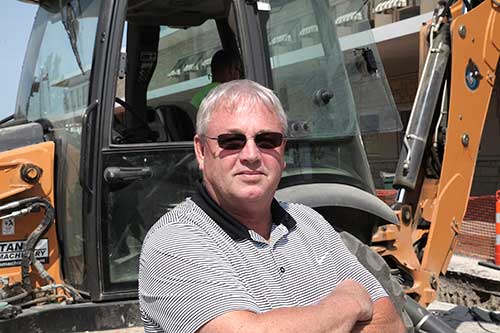 Jon Fye founded Fye Excavating in Sperry, Iowa in 1995 with only three employees. Incorporated in 1998, Fye Excavating Inc. now employs over 50 people. The company provides full-service excavation, site work, commercial, utility, and “plan and spec” work in Iowa, Illinois and Missouri—the majority of their work being within a 100-mile radius of the company’s headquarters.

The beginning of Jon’s story started with a backhoe. Out of high school, he began his career on the Burlington Northern Railroad as an electrician, stripping and rebuilding locomotives. In 1995, he was building a house for his family, and decided to purchase a CASE 580 Super E backhoe.

“In the mid-90s, I decided to build a house and purchased a backhoe. And kind of as a hobby started doing some side work,” Fye explains. “And it evolved into the purchase of a bulldozer. It was a CASE 850 dozer and a CASE 580 Super E backhoe. We can say that was the start of the business. Each year, we grew the company a little larger, and eventually got into commercial work and got away from the residential side of things, and seemed to enjoy that. The plan and spec side of it was very interesting, and we had a lot of growth through the years.”

Leaving a steady job at the railroad with a growing family was a tough decision, but Fye had built his earthmoving business into a sustainable living, and decided to make the jump in the late 90s.

“The company had grown [at] a pretty hectic pace. I was working 3:00 PM to 11:00 PM for the railroad, in the afternoon, and was getting up early and working. I had a crew of about eight, and the work was just getting overwhelming. It was 100+ hour weeks and commitments were being kept—but it was hard to keep them. And I had a growing family at the time.”

“We’d made a major decision in the late 90s, to go into the earthmoving business full-blown, and make a living at it. And we were quite prepared for that—we had been doing it for five years. But it’s a big commitment to quit your day job. And we did, and we’ve had sustained growth for 20-years plus.”

Fye started his business as a hobby in the mid 90s with a CASE 580 Super E backhoe. Having owned several CASE backhoes—and now the owner of three CASE 580 Super N backhoes—he has seen the evolution of the backhoe firsthand throughout the development of his company. While some applications have shifted to multiple/separate machines (a CTL and a mini excavator, for instance) performing the work once dedicated to a backhoe, Fye believes the backhoe still has a primary place in equipment operations today.

“The backhoe is the very first piece that we bought, and I bought it somewhat as a toy and grew a business around it. There continues to be a place for the backhoe in today’s construction sites. The backhoe is a great product hauler onsite, with the option to dig, add attachments to vibrate compaction in place, jackhammers and those types of things. We have hydraulic thumbs on our backhoes as grabbers and to be able to pick up debris with them. They’re still truly the most versatile of all the machines that are out there.”

“We’ve had the 590 and the 580s throughout the years, and as our company grew and we’re in multiple locations, I personally found it great to have some uniformity. The purchase of the last three brand new Super N’s was a great day because we bought all the products that go with the machine at one time, and they stay with the machine. If it gets moved, all the buckets get moved. [Not having to] chase parts and pieces around was a big savior. We like the Super N because of its weight and how it maneuvers on the site.”

CASE backhoes have continually evolved since Fye’s first 580 Super E—the 580 Super N features world-class hydraulics, a PowerLift feature that offers lifting capacities comparable to an 8-ton excavator at the push of a button, as well as other advanced features like auto-idle, auto-shutdown and ECO-mode. The machine also features a spacious cab design that provides excellent visibility and operator comfort.

“The hydraulic systems are just phenomenal. The power, the smoothness in the operating of the new machines [has advanced considerably] over the old Super E that we started with.”

Fye decided to outfit his 580 Super Ns with the available four-wheel-drive option, which has an auto-Ride Control feature designed to provide a smooth ride for the operator, and to keep more material in the bucket over rough terrain.

“The Ride Control comes in handy when maneuvering on rough ground, and even on street projects in town. If you have your backfill material a half a block away, anytime you scoop up product and you’re running loaded, the Ride Control allows you to run without spilling the product and bouncing the machine. All of that just falls under safety also. You’re not getting the streets dirty, and the machine can maneuver faster—and time is money.”

Looking Toward the Future

In addition to the relationships that he has built with his employees and his clients over the years, as well as readying the next generation of Fyes to continue with the business, Jon Fye has a positive and intelligent outlook on the future of his company.

“We feel like we’ve grown the company horizontally. We’re not mass-excavators, or mass off-road trucks—that’s not part of our fleet, I guess. We do site work, site utilities, and our growth has been to build pockets of people that can continue to do the same thing that we do each and every day. So we feel like we’ve gotten better at what we do. We’re not a major highway builder. It takes a whole different fleet of equipment to do that.”

“And I think that we—our growth and our company—will probably move forward in the same direction that we always have. We continue to build strong relationships with our employees and the people that we work for, and also our equipment suppliers. And they’ve done a great job of taking care of us. CASE has been with us from the beginning—with our first backhoe, up until today.”