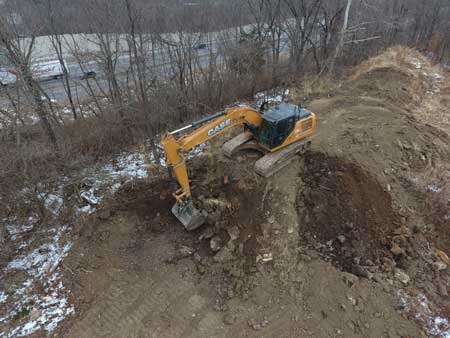 Carl Faulkner began his career in the cab of his father’s excavator over 30 years ago. Working for his father’s company at a young age, and staying in the trade all these years, Faulkner decided to start his own company in 2012.

“Most commonly we do subdivisions,” explains Faulkner. “We’ll do the excavating for subdivisions, we’ll install the infrastructure of the sanitary sewer, storm sewer, water mains, the services to reach each lot. We’ll also do commercial lots.”

Currently, Faulkner is on a four-acre jobsite in Kirkwood, MO. Prepping the site for the development of several upscale residential properties, one of the challenges has been working with unsuitable soil that needed to be removed and replaced.

“Someone had used this site for their own business, for years and years, where they had dumped brush, debris and concrete. Most of the soil is unsuitable because it consists of a lot of organic material. We need to remove that so we can get back to original ground and actually replace it with engineered fill.”

With the site development phase slated for 60-90 days, the project will eventually be the site of eight high-end residential lots. “It’s going to consist of more upper-end scale homes. I think they’re starting around $800,000 and going up from there. We’ll be loading material out, later on we’ll be importing shot rock for a shot rock buttress to support the slope, and a large retaining wall that’ll go on there to help support the homes and build a site in the engineered fill.”

Like many residential development projects, heavy equipment access is critical. It takes the right combination of size and power to get the job done. Faulkner is using a 25-ton CASE CX250D excavator on the Kirkwood site.

“This excavator is perfect for this job — it’s the biggest machine you can get in here, because of the tight conditions, getting through the residential street to get to this isolated site. Once it’s in here, it’s more than capable of loading the trucks. We’re going to have several-hundred loads of material to load and haul out of here, so it’s more than capable of doing that. It’s got plenty of strength, plenty of power. We’re going to have to do the utilities in here, as well, and that machine can handle all of the concrete, the pre-cast materials we need to lift, as well as all the trenching that’ll need to be done.”

Working in an isolated area with rough terrain presents a variety of challenges for site development contractors, but Faulkner is pleased with the performance of his equipment. “On a job site like this, it’s all about accessibility. There’s a lot of steep slopes, a lot of unsuitable soil you’re trying to deal with, so you’ve got to have the reach that a machine like this offers, and you’ve got to be able to remove that material and get yourself a good working area.”

A comfortable cab is important for any operator, but at 6’9”, Carl Faulkner needs an operator environment that goes above and beyond average. With best-in-class cab space, CASE D Series excavators offer more standard features than any previous CASE excavator, including a fully adjustable operator station anchored by a standard heated air-ride seat and adjustable joystick controls.

“You can move the whole operator station forward and back, then you can also move the seat independently from that. Once the air ride seat is all the way back, my legs can stretch out — I can rest them on the foot rest that’s down on the floor board, I can rest them on there with nice comfort, stretched out. So, a lot of times when we’re running 10 hours a day, the comfort of this machine is very nice for me.”

The CX250D also features a variety of other standard ergonomic features built into the operator station. “On the left joystick there’s a trigger that you can squeeze and it actually mutes the radio. So, if someone comes up to talk to you, you can hit that button and it’ll mute the radio. Coincidentally on the right joystick there’s a button, which you push with your thumb that automatically idles the machine down to idle speed. So if someone walks up, you can turn the radio off, you can idle the machine down in less than a second, and you’re able to talk to somebody in a normal tone of voice.”

The CX250D achieves fast cycle times through a new electronically controlled pump, a large control valve and multiple sensors. These features combine with the CASE Intelligent Hydraulic System to make the best use of the machine’s hydraulic power and momentum, resulting in added strength and fuel efficiency. The machine also provides the operator with three working modes — Speed Priority, Heavy and Automatic — that help the machine conserve energy and exert only as much power as needed to complete the job at hand.

Using a 66-inch bucket to load trucks and dig trenches on site, Faulkner discusses the importance of achieving balance and efficiency with a larger bucket on a 25-ton machine.

“You gauge it on what the machine can handle as far as lift capacities, breakout force, digging power, and then also speed, and cyclability — how quickly it can make a full revolution. Especially if you’re loading trucks behind you — being able to handle the load comfortably and make sure the machine’s balanced with that big bucket. That’s probably the biggest bucket you’re supposed to put on that machine and it has handled it just fine. The machine sits on top of the pile nice and balanced, they have no trouble with stability, trying to load, or even to reach down into deep ditches digging out and placing rock into the trenches for bedding the pipes.”

Visibility on the jobsite

Another important feature that Faulkner mentions is visibility. The CX250D has several standard and optional features designed to improve operator visibility on high-production jobsites. The machine itself is designed with a low-profile hood for improved visibility from the cab, and a standard rearview camera feeds a 7-inch widescreen monitor.

The machine is also available with a new (optional) LED working light package that includes eight LED lights (four front, two rear and one on each side).

“We like the visibility on this machine because it’s nice and open. One thing is if you are trying to look behind you, the hood is down nice and low. It does have cameras in the back and also on the side because this particular model has the LED light package, which offers an extra side camera and lights all the way around the machine.”

“The visibility is good, plenty of glass to see out of. You can see out the front glass to your work area, where the bucket is. If you’re trenching, loading trucks, plenty of visibility there. The cameras are nice because again, you can be aware of what’s around you.”

Many contractors start their days early in the morning and work well into the evening. Safety and visibility becomes even more critical when working before the sun comes up or after dark. “When you do work in those low light conditions with the LED light package, it lights up a 360 degree area all the way around the machine nice and bright. You’re not waiting as you swing for the lights to get into the area you’re about to go work in. You can already turn your head and see the area lit up, knowing where you’re going with a bucket of dirt or whatever it may be.”

“One of the things I liked about this machine was that CASE offered a three-year maintenance agreement where they take care of all the scheduled maintenance for the first three years or 3,000 hours. That’s a load off of my mind because then it’s something I don’t have to worry about, I just communicate with the CASE store that I bought it from.”

Carl has worked with Luby Equipment Services since Faulkner Excavating has been in business. “They’ve been a very instrumental part of my growth,” he explains.

Luby Equipment Services is a family-owned company headquartered in Fenton, MO, with several locations throughout eastern Missouri and Illinois. In the equipment business for over 40 years, Luby’s experienced staff handles regular maintenance and service intervals for Faulkner’s equipment so Carl doesn’t have to worry about it.

“They’re able to come out, we schedule that through the service department. They bring all the filters, all the oils, all the necessary stuff. They take care of everything from start to finish, that way I don’t have to worry about it. I know it’s being taken care of by professionals. It’s one less thing that I have to worry about or concern myself with trying to do.”

With honesty and integrity at the forefront, Faulkner Excavating continues to grow as a successful business. Carl has been able to expand his operation over the last several years, and is looking to add personnel. “I’m particularly proud of our integrity. We do try to give everybody a quality project. We try to make sure we do it right, we work well with not only the builder, but all of the utility operations and municipalities.”