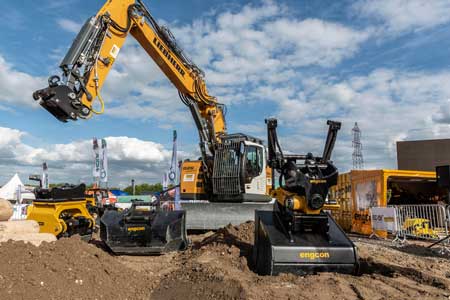 Engcon has been manufacturing and selling its tiltrotators, quick couplers, control systems and tools for excavators throughout Europe and Australia for 27 years, and in North America for 11 years through dealers.

Held in Paris, Intermat is one of the world’s three largest construction and machine fairs, and in this year´s edition, the world-leading tiltrotator manufacturer Engcon conducted a live demonstration with two non-stop excavators. The company also offered a test run on two additional excavators.

Intermat alternates every three years with CONEXPO, held in Las Vegas, and BAUMA, held in Munich. The show was the official launch for an intensive international trade show season for Engcon. North American exhibitions include Demonstration Days at Engcon offices on June 16 and July 14.

“It is now full speed for the exhibition season and it is incredibly important for us to attend as many of them as possible. Exhibitions are one of the best opportunities for us to showcase our products and especially talk about our latest news,” said Sten Strömgren, communications manager at Engcon Group.