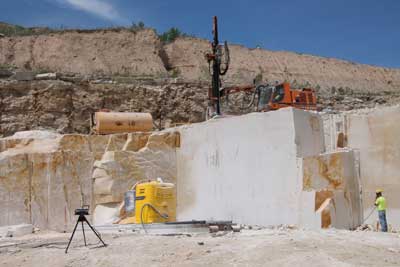 Valders Quarry is blessed with an almost one-of-a-kind treasure among quarries in the US in the quality of its building stone — which fully meets the ASTM standards for high density Type lll dolomitic limestone. It is currently being quarried in large blocks.

Purchased by Eden Stone Co. in 1992, the Valders, WI quarry’s stone had not been fully appreciated for its uniqueness. In fact, it had mostly been broken up into rip rap and carried by rail to the shore of Lake Michigan to help prevent erosion.

Eden Stone promptly set about making better use of the top quality stone. A part of the Niagara Escarpment, Valders’ stone “was deposited in a shallow tropical sea with long periods of undisturbed deposition,” according to Martin Biller, company geologist and Director of Plant Safety. “Because of this, unlike most sedimentary rock, it can be quarried in large, seamless blocks.” Stone blocks produced at Valders Quarry are part of a limited amount available on the market today.

Valders Quarry’s stone is strong, durable and resistant to staining, acid rain and abrasion. Its colors are exceptionally beautiful, with variations in color from dove gray to dove white; light buff, buff, and dark buff. Flame finishing can bring out a pinkish hue, due to the high magnesium content. This stone can produce beautiful, one-of-a-kind buildings that are easily maintained, as well as interior and exterior enhancements.

Martin Biller showed us a graphic demonstration of the durability of Valders’ ASTM type lll dolomitic limestone compared to the much more common type ll limestone. When Biller put a drop of weak (10 percent) hydrochloric acid solution on a piece of type ll limestone, the stone surface reacted chemically to the acid, fizzing and bubbling. The Valders stone showed no chemical reaction at all to the same acid application; it simply looked wet.

What makes the difference? “Our Quarries have had about 35 percent of the calcium in the rock replaced by magnesium, over a very long time, in the warm, shallow seas that once covered this area,” Biller explained. “If you ask five geologists, they’ll give you fivedifferent explanations of exactly how this happened.” The high magnesium content of Valders’ dolomitic limestone gives the stone quarried there its strength, durability, and resistance to weathering and abrasion.

After purchasing Valders Quarry, Eden Stone Co. first set about equipping stone cutting and finishing shops at Valders with the tools needed to make the best use of this very special stone. Some of the cutting and finishing equipment used today at Valders is not employed anywhere else in the United States. In fact, the renamed Eden/Valders Stone is still investing in equipment for quarrying and for fabricating the Valders Quarry blocks into specialized building components.

Next, Eden/Valders Stone began fine-tuning the quarrying methods used to produce the massive stone blocks so prized in the custom building trade, looking for quarrying methods that minimized waste. For a while the stone blocks had been broken loose from the surrounding rock by nudge blasting, using small amounts of explosives after parallel holes on 18-inch centers had been drilled the entire depth and width of the dimensional stone layer.

Not satisfied, the staff at Eden/Valders Stone began studying the use of diamond cable cutting in marble quarries abroad. Diamond cable cutting produces a perfectly smooth face on precisely sized blocks, which are ready to be cut and finished for architectural use with very little waste.

In 2013, Eden/Valders Stone hired a new Chief of Operations to supervise the staff in the use of their recently acquired equipment, a position currently held by Chad Radtke. On Radtke’s watch, the company has continued to purchase the newest and best equipment to minimize waste of this valuable stone.

“Blasting, once common at the quarry, is now rarely used,” explained Martin Biller “We blast now mostly to remove the overburden from the area to be quarried,” and occasionally to lower the working ledge to expose more of the 18 -40’-deep cut stone layer to make best use of it.

The production of large saw blocks at Valders Quarry now begins with the painstaking drilling of two perpendicular locator holes outlining the block to be cut, using a Tamrock Drill with a diamond bit. Long-time employee Richard Dufek performs this extremely exacting work. “I start to drill the vertical locator hole about five feet behind the rock face,” he explained. “When that has reached the correct depth, I drill a horizontal hole in from the side of the block.”

The two holes must align perfectly. “Some days we succeed in drilling two perfectly aligned holes the first time. Sometimes the holes don’t align, and we have to re-drill.”

Once the drill holes align, the diamond cable is threaded in using a series of hooks and magnets to draw it through the perpendicular holes. “As the cable comes down to the saw, it gets threaded onto the flywheel and closes the loop,” added Biller

Valders Quarry is currently in its fifth year of using the diamond cable. Eden/Valders Stone management believes it is easier to quarry here using this technology, although the diamond cable does cut slowly. Now, very little new wasted rock is produced, although broken pieces from former blasting are still strewn around the quarry.

The diamond cable, moving at tremendous speed, cuts a perfectly smooth, sheer face on each massive block. “To separate the block further from the surrounding rock, steel bags are slid into the kerf made by the saw and filled with pressurized water,” noted Operations Chief Radtke.

Once the crack has been opened wide enough, a loader mounted custom-manufactured tipping boom (ACS Industries) tips the stone block down from the ledge onto old heavy-equipment tires, which cushions the fall.

The block is then carried to the Rice Lake Survivor® scale – which was custom fit into an existing installation. After weighing the block — average 20,000 pounds — the operator marks the weight and the month and year the block was cut. The color will be code-marked on the stone. Then the loader operator moves the block to the storage yard, awaiting use for just the right project.

Quarrying methods and equipment continue to evolve. Just a month before our visit in May 2017, Eden/Valders Stone acquired a new piece of equipment for Valders Quarry. Manufactured in Finland, the Splitstone S-100 is used to split very large blocks into smaller blocks when needed or to split the working ledge in the quarry to expose more high-quality stone. The Splitstone utilizes the hydraulics of the loader, in this case a Volvo. Once the hydraulics are hooked up, “We push the wedges down, hit the valve and the Splitstone cracks the stone blocks,” explained Richard Dufek.

Valders main quarry covers 376 acres and currently has less than 70 open. This quarry can be extended to the east (as is currently being done) or to the north, although that would require the removal of tremendous amounts of overburden. As the quarry is extended to the east the blocks are expected to become smaller and more irregular — suited for fabrication into veneer.

The Valders Quarry facility is exceptional in many ways. Their safety record, with about 55 employees, is outstanding. “On November 3, 2017, we reached 2900 days with no lost-time injuries,” explained Biller.

In addition Eden/Valders Stone’s environmental actions have earned a 2016 award as a Wisconsin Business Friend of the Environment. This award was presented for the company’s use of innovative methods for solving environmental problems, and for “going beyond the effort required by regulatory compliance” to solve a serious flooding problem involving the village of Valders and its elementary school.

The project involved completely rerouting a tributary of the Manitowoc River, creating a more natural pathway for its bed, which prevented flooding. Eden/Valders Stone also created a 5-acre wetland on the property where sediment can settle out before any run-off water reaches the tributary, which eventually empties into Lake Michigan. A similar wetland/water purification area had already been created on the opposite side of the quarry.

Building stone from Valders Quarry is mainly used on a custom-project basis. The company works closely with architects to choose just the right stone for the appearance envisioned. On two major building projects, architects have actually come to Valders Quarry to personally choose stone for its pattern and color shading. For the Charlotte R. Bloomberg Children’s Building at Johns Hopkins Hospital and for a large residential project on Long Island, Eden/Valders Stone cooperated with other Marble Institute of America members. Other recent major building projects using stone from Valders Quarry include Yale University’s Bass Library and a third building for the University of Massachusetts, Amherst; as well as buildings at the University of Michigan and the University of Illinois, Chicago.

Eden/Valders Stone’s close collaboration with architects has brought many repeat customers, and the resulting buildings have won some of the highest awards in the industry, including the Tucker Design Award and the Pinnacle Award of Excellence, which is sponsored by the Marble Institute of America.