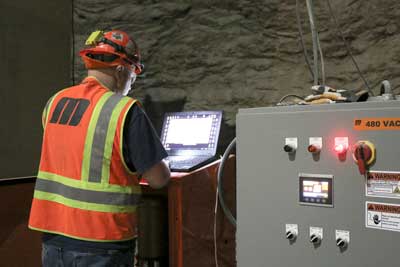 It’s no secret that limestone is the dustiest substance in the cement production process, largely because it’s the primary ingredient. Dust, also known as ‘particulate matter,’ is tightly regulated at the state and federal level, both in and out of the workplace. Managers at Continental Cement Company, LLC, in Hannibal, MO clearly understand the potential impact of fugitive dust emissions on workers and the local community, and they take preemptive steps to create the safest operational environment possible.

“We opened the underground limestone mine in 2013 and brought it to full commission in 2015,” said Leonard Rosenkrans, Environmental Manager at Continental Cement. “Dust generation is unique to each operation, and it’s only when the mine is fully operational that adjustments can be made, so once we identified problem areas, we immediately sought solutions.”

Only a short drive from author Mark Twain’s boyhood home in the small town of Hannibal on the banks of the Mississippi River, Continental Cement has been in operation since 1903. For more than a century, the company has continued to improve and increase operations to reach a current cement production capacity of 1.2 million short tons of clinker annually.

Having utilized most of the suitable limestone from surface quarries over the many years of cement production at the location, a 350 foot (106 m) underground mine now provides the primary source of limestone, which makes up 75 percent of the raw material required to produce the meal in the company’s Type I/II, and Type III Portland cement. Yielding 1.6 million short tons of limestone annually, the extracted material is transported via truck and high-speed conveyors in order to move it to the surface, where it is held in a 100,000 ton outdoor storage pile, then processed through a four-stage preheater / precalciner dry process cement kiln.

Although the cement plant is a 24-hour operation, the mine works on a 10-hour-per-day, 4-day work schedule. Fifty-ton trucks dump 600-650 t/h of extracted limestone into an underground hopper that feeds an impact crusher, which reduces the rocks to 4-inch minus. The aggregate is then loaded onto Conveyor 0, a 60-inch wide belt traveling approximately 700 fpm for 400 feet. The rock is discharged through a transfer chute onto Conveyor 1, travelling up the 1,300 foot inclined belt to the surface and dropping 20 feet onto the outdoor storage pile.

With plans to potentially add another kiln in the near future, demanding even more production from mine operations, the need for dust control is critical to the operation. “The two main areas we identified as having unacceptable dust emissions were at the underground crusher hopper and outdoors where the material was discharged onto the stockpile,” Rosenkrans explained. “With the mine having a single exhaust point, we didn’t want the dust from trucks offloading into the hopper to travel through the mine shaft, lowering visibility and reducing air quality. Also, with a high drop at Conveyor 1 when the storage pile is low, we didn’t want dust to travel long distances on windy days. Unfortunately, our previous dust control equipment wasn’t doing the job.”

Small particles are released from normal operations, such as loading / unloading, transferring or crushing material. At 200 microns or less in diameter (200 micrometers), a particle can remain airborne and ride ambient air currents for long distances. At particle sizes less than 50 microns they become non-visible to the naked eye and can penetrate the body’s natural defenses (cilia, mucus, etc.), entering deep into the lungs and potentially causing long-term health issues.

The most common industry solution attempts to address particles released from normal operations, such as loading, unloading, wind and disruption of material, by using water for surface suppression. The goal is to wet the surface of cargo to promote cohesion of particles to prevent them from becoming fugitive airborne emissions.

The original dust control equipment followed that traditional approach, with a goal of wetting the surface of the cargo in order to promote cohesion of particles and prevent them from becoming fugitive airborne emissions. However, Continental Cement discovered issues with this type of solution when applied to its material handling and stockpiling operations.

Operators learned that water alone was not adequately controlling the limestone dust. In addition, the water supply was found to have excessive sodium content, causing the nozzles, valves and other components to quickly deteriorate and fail, resulting in leaks and insufficient water pressure.

A holistic view of dust control

Martin Engineering representatives visited the site with a trailer containing a fully functional Martin® Dust Control Unit (DCU), allowing a full demonstration of the unit’s capabilities. Conducting an end-to-end walkthrough of the cargo flow, technicians were able to determine the best course of action.

“After inspection, we devised a plan that optimized the dust control at both locations, while using as much common equipment as possible,” said Brian Nance, product engineer at Martin Engineering. “Martin’s DCU is designed to independently control dust at several application points, thus allowing for the use of much of the same technology, while employing a different strategy for each of the two emission areas.

“Using the same additive, we were able to offer treated water suppression close to the hopper’s point of emission and then also apply the chemical at the transfer point between Conveyor 0 and Conveyor 1 to mitigate emissions all the way up to the stockpile discharge point.”

Constructed over two days and scheduled to coincide with mine downtime, three technicians installed the DCU at a location with water and electrical power. A 6-nozzle cradle-mount system was installed to provide serviceability at the Conveyor 1 discharge, and a manifold system was placed to address the issues at the dump pocket. Material monitoring sensors were employed at both locations to ensure application only when needed.

The pumps in the DCU are powered by variable frequency drive (VFD), allowing independent control over the flow of water and chemicals for each pump. Water application is monitored, and the proprietary Martin MEL-101 chemical binder additive is dosed at the proper ratio to suit the operating conditions. Fail-safe mechanisms are incorporated to shut the unit down and close valves to protect pumps and other equipment from line blockages or breaks. The entire system is integrated, so that it can be monitored remotely from the plant’s central control room.

Using additives, limestone dust particles are able to agglomerate with each other, increasing in size and weight and making them less likely to become airborne, thus preventing fugitive emissions. With an approximate 300:1 water-to-additive ratio, the MEL-101 supports the water’s role in providing dust suppression using economically concentrated quantities. To control costs, the VFD driven pump regulates chemical flow by only releasing chemical when material is detected.

“The theory behind how we placed the spray heads is important,” said Nance. “It’s common practice for companies to spray the top of the material after it’s been loaded on the belt as it’s exiting the settling zone. But that approach wouldn’t work for this application.”

He went on to explain, “The problem with only spraying the surface is that only surface particles are treated, and the fines tend to ride on the bottom layer near the belt, preventing them from being effectively coated. The untreated particles easily become fugitive once the cargo is disrupted or transferred.”

Due to the difficulty of treating particle emissions at the discharge of Conveyor 1, technicians set up the Martin DCU to spray the material in the transfer chute between Conveyor 0 and 1. “By attacking the material from the top and bottom while it’s in free fall, we are able to effectively coat more of the dust particles,” said Nance. “As cargo continues its transit and is discharged onto the stockpile, the particles are already treated and remain in the material flow.”

Nozzles were placed at the hopper mouth, so the DCU could spray treated moisture inward toward the impact zone. As the cargo is loaded by haul trucks into the dump pocket, the discharge creates a tremendous amount of airflow, lifting the small particles into the air. Prior to the Martin system’s installation, fugitive dust would exit the far end of the hopper and settle in the immediate work area or travel with the prevailing air movement through the mine. This raised concerns over workplace air quality. By keeping the particles within the material flow, the new dust control system helps minimize health and safety issues, reduce wear and tear on equipment and create a better work environment.

After some fine-tuning to obtain the optimal chemical-to-water ratio, as well as proper sprayer placement for best coverage of the cargo flow, the system has eliminated most visual signs of dust emissions and has drastically improved air quality in and out of the mine.

“It’s almost like a light switch,” Nance said. “Turn the DCU on and the dust is no longer present at either of the emission points. Turn it off and within a few minutes, the dust returns.”

Martin’s preemptive dust mitigation strategy helped Continental stay ahead of state and federal regulations on dust emissions. Along with improving the work conditions inside and outside of the mine, the cement manufacturer continues the positive relationship it has had with the community since its inception.

“The Martin team has gone above and beyond to make sure everything is operational and efficient,” Rosenkrans concluded. “We are currently considering a service contract for the new dust system, and potentially including the company’s onsite blade replacement service as well. From our first encounter, we’ve had a positive experience throughout the entire process and we’re very satisfied with the result.”

There are many ways to look at the direct benefit to the company, including reduced health and safety issues as well as increased equipment life. Sometimes it pays just to do the right thing.