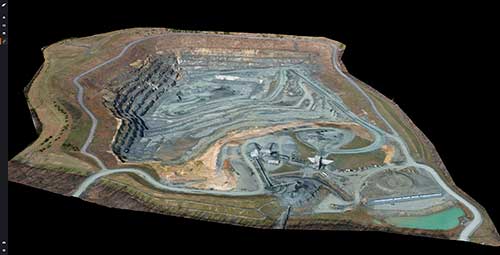 Early on in the history of one Texas company — Reece Albert — their executives realized they could better control a job site if they had their own material supplies and hot-mix plants. The firm later pursued the lease of San Angelo’s Willeke Hill and other quarries in the west Texas area. In time, CSA Materials, Inc. (Crushed Stone and Asphalt Products) was formed in the 1980s.

Asphalt plants, some of them portable, are now deployed at the quarries and serve not only the needs of Reece Albert, Inc., but scores of CSA customers who perform their own paving. This company has always believed they work for people who have high expectations to produce the kinds of materials customers want. They strive as well to produce aggregate that not only meets all requirements but also exceeds them.

A wide range of customers attest to CSA’s success in meeting this goal. Customers range from those operating trucks from federal and state highway departments, city and county governments, to family pickups driven by those simply needing a yard of sand. But managing the information on CSA’s widespread inventory has been among their toughest challenges in the face of their great success.

“I have handled a lot of technical questions involved with mining for the past 20 years,” explains Brian Biggerstaff. “My degree is from Texas A&M, in Chemical Engineering. I’m not exactly sure how I ended up in mining, but it is just something I did for a long while.”

Years back Biggerstaff started recommending that CSA look at drone programs since such technology seemed to be advancing rather quickly according to Biggerstaff. “I am actually the one in the company responsible for picking a measurement system and reviewing what scheme being considered – including that of using drones. So I got pegged as the one developing the technology with drones for the company.”

Now that the firm as adopted the use of drones, Biggerstaff typically ends up answering any questions for the company involving drone technology; if he can’t answer the question, he finds the right person who can. The drone program at CSA has one person dedicated solely to work with their drones. “I remain in charge of training the drone personnel,” adds Biggerstaff. “I also make sure that the program stays on track.

“West Texas, as you may imagine is country with lots of room, sites of operation that are quite spread out. There are no dense urban centers. We operate in a very vast area, covering some 50,000 square miles – many miles of road to cover.”

Most of the time CSA services the highway aggregate industry. Roads and highways are required in this immense territory, with an equally huge area of services. They have four large fixed quarries and a dozen portable locations, which, once they move into, they will keep inventory at any given time. Over the past decade they have been involved with over 50 different locations.

“At those twelve or more locations with inventory we had a very established way of doing our inventory,” explains Biggerstaff. “And that way was to go and take an inventory snapshot of everything there – once each year.

“Surveyors would go out, walk the piles, and the resulting time involved was at least an entire day. Other sites might take some three days to walk them. This method involved a massive amount of time invested in recording inventory.”

In addition, those involved would come back and place the measurements on an AutoCAD to determine volumes, eventually handing that information to operations where they would have to take that data, make spread sheets which in turn were used to calculate volumes. The time involved meant that this type of assessment could be done just once a year.

However with their current drone service, they’re now measuring those same dimensions each quarter instead of once a year. “And for the surveyor doing his work, that’s not his only job. He has other work as well. But now, utilizing drone technology that same surveyor can go out and measure everything we have in about a week and a half – and doing that same task four times a year as well. This used to take three surveyors three weeks. Now one person does it in a little over three weeks.”

The firm’s drones are also able to make surveys on demand, since many times CSA simply wants a snapshot of what’s out there. CSA also makes hot mix. So at one location out on a highway all needed materials and aggregates can be delivered to the site. “We in turn can order a survey,” adds Biggerstaff. “This is so that after those involved are done hauling in materials, a picture may be taken to verify what is actually onsite.”

The Kespry drone is less than five pounds and hawk-sized. As Biggerstaff points out, there are many different drone brands as well. “Also, how much the tiny aircraft can measure keeps increasing as time goes by.”

“With the drone system we use you can literally keep on going, recording data, until the battery goes out. But after replacing the battery you can keep flying. This flight is generally at a maximum altitude of 400 feet, according to what is specified by the Federal Government. Most drones now have lock out controls so they go no higher.”

Laws involved with drone use are evolving, according to Biggerstaff. At present no licenses are required to use them for private use. But flight for commercial use requires an FAA license, including a test on flight and regulations before the license is issued. As Biggerstaff discusses here, the use of drone technology is an excellent fit for those whose inventory control requirements call for before and after assessments.

To date some 137 missions have taken place, involving 46 flight hours. The acres mapped amounts to 5,889, with 1,132 piles measured, 23,100 photos taken, and 177.75 gigabytes of data gathered. An area from Del Rio, Texas, to Lubbock, Brady, and Abilene is covered. The operations involve three large fixed or permanent sites, and about two dozen small sites. Since Biggerstaff has been involved in operations they have been active with 80 sites.

“Quarry tracking has been a daunting task in the past, but this has proven to be a superior method to visualize material we’re handling,” adds Biggerstaff. “We now can get a quick idea of what’s left in our inventory. This fact increases our competitiveness in that we now can respond quicker to any changes we see. Checking inventory once a year also left us too much uncertainty.

“This has proven to be a superior method to visualize material we’re handling,” adds Biggerstaff. “We now can get a quick idea of what’s left in our inventory. This fact increases our competitiveness in that we now can respond quicker to any changes we see. Checking inventory once a year also left us too much uncertainty.

“Drone technology is analogous to the increase in power and sophistication of computers all through the 1980s. The Kespry system requires just a little bit of knowledge to get started. I see interesting times ahead as drones continue to evolve.”