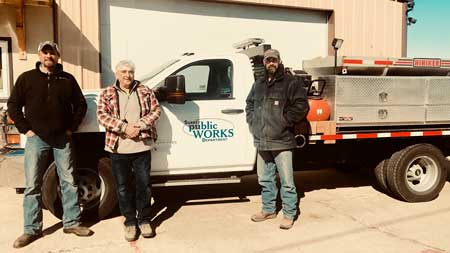 CASE Construction Equipment has awarded the $25,000 Dire States Equipment Grant to Surrey, ND for much-needed road drainage revitalization and flood control projects throughout the city. Due to years of sudden urban planning and insufficient funding, several drainage-ways have filled with years of sediment, restricting natural run-off of storm water and yearly snowmelt. There are also several roads that require drainage ditches to be installed to prevent flooding.

The poor drainage has wreaked havoc on roadways throughout Surrey — costing large portions of the city’s yearly budget to maintain. In addition to flooding and infrastructure damage, the drainage issues have caused several areas in town to collect and pool standing water, creating a public health concern.

The 2018 grant will provide the township with $25,000 in free equipment rental for the project through CASE dealer Titan Machinery.

“This grant will allow us to finally address some of these major drainage concerns in our city,” said Keith Hegney, public works director, Surrey, ND. “This will vastly improve our community’s drainage issues by stopping flooding and saving our city’s roadways by removing vegetation and soil, grading the land surface, and constructing drainage networks to assure natural drainage. Misdirected storm water runoff can and will continue to cause major damage to our city’s infrastructure if we don’t take care of it. Now we can.”

“Dire States is all about making an impact on communities that have struggled under the weight of their crumbling infrastructure,” said Michel Marchand, vice president — North America, CASE CE. “Drainage control and flood mitigation are essential when it comes to positioning a city for future growth, and these projects in Surrey, ND will improve multiple facets of the community and its operations. Making a difference at the local level has been the focus of the Dire States Grant since it launched three years ago.”

The grant was awarded after soliciting submissions nationwide from local communities to use heavy equipment to improve a critical piece of local infrastructure. A committee of representatives from CASE chose the winner.

Awarded with the first Dire States grant in 2016, the Tioga County Soil and Water Conservation District (SWCD) in Tioga County, NY, used the grant to supplement its Environmentally Sensitive Stream Maintenance Program. The program is in place to mitigate damages from flooding events, which have had considerable impact on the local infrastructure and the community. Tioga County’s local CASE dealer, Monroe Tractor, assisted multiple municipalities in environmentally sound, necessary projects to protect, upgrade or restore ailing infrastructure.

A total of five projects in four towns were completed with the assistance of the Dire States Grant. Each project was an opportunity to assist a municipality with the equipment rentals, as well as an opportunity for hands on training for Tioga County municipal leaders.

One of the completed projects was an undersized culvert in the Town of Berkshire. The culvert was damaged in storm events and was a barrier for aquatic life passage. In addition, an 8-foot drop off continued to erode and created a dangerous safety issue for the community.

The SWCD used the Dire States Grant to assist in the construction and installation of two new culverts. Both culverts were replaced to the appropriate width, set at an elevation to promote natural streambed materials to fill the bottom of the culverts. Culverts were installed and constructed with rock riffle on both the up and downstream passages. The highway superintendent and staff assisted in the installation process, encouraging shared services and hands on training for municipal staff members.

Other projects completed by Tioga County with the help of CASE’s Dire States Grant included channel realignments on the Piester Stream channel and on Davis Hollow Road. Emergency repair work caused by flash flooding was completed on Sackett Creek in the Town of Nichols. Lastly, the Diamond Valley Road Bridge received a streambed repair after storm events threatened a home upstream of the bridge.

Since its inception, the community building grant has been awarded to two important infrastructure projects that have made a direct impact on the people of those communities.

In 2017, Quincy Township, PA won the grant for replacement and repair work on the Old Forge Bridge — a deteriorating bridge in an important location that risked access to residents, as well as fire departments, ambulances, police, school busses and other essential components of the community.