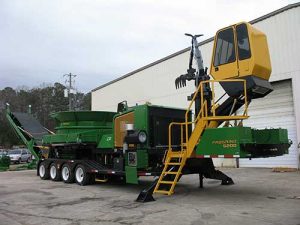 In 1992, Hurricane Andrew caused over 25 billion dollars in damage to the state of Florida. After the horrific tragedy, the state was in need of cleanup. At the time, John Guillemette worked for a large construction company in Southern Minnesota. He was sent to Southern Florida as part of a hurricane cleanup crew. Guillemette spent six months in Florida leading the company’s grinder division.

Upon returning to the Minneapolis–Saint Paul area, Guillemette became a manager with the company and stayed with them till 2001 when the company was bought out by NRG Energy. When NRG Energy went bankrupt, they offered to sell the grinding division to Guillemette. The two sides worked out a deal, and Dakota Wood-Grinding, Inc. was created in 2003.

Fourteen years later, Dakota Wood has a staff of eight plus Guillemette and clients in five states (Minnesota, North Dakota, South Dakota, Wisconsin, and Iowa). Dakota Wood’s main client is District Energy. When they converted the plant in St. Paul to biomass wood, they brought in Dakota Wood to grind, and the two have been working together ever since.

Dakota Wood is not the cheapest grinder around. However, Guillemette says, “We come when we say we will, make sure we get the job done, and we work with reliable machines.” The machines that Guillemette refers to are the Precision Husky ProGrind 5200 KBL. Regarding the machine, Guillemette says, “People are awed and amazed when they see it in action. The wood just pours off the conveyor belt.” He’s confident that no machine grinds quicker. This spectacular output is due to the double capacity 140 Tub Drive Chain and the 60” wide stacking conveyor belt.

As happy as Guillemette is with the earlier model, he is even more pleased with the Precision Husky ProGrind 5200 KBL. Besides its speed and capability, Guillemette appreciates the ease of maintenance features of the 5200, which is done through various monitoring systems.

Another feature of the ProGrind 5200 KBL is the PT Tech HPTO™ Hydraulic Power Take-Off. It’s a totally enclosed wet hydraulic clutch that requires no adjustment throughout its wear life. During a torque spike, the clutch will act as a torque limiter by slipping to absorb the shockload.

The system allows operators to continuously monitor mill performance. The design innovation helps identify potential problems before they actually arise. “They’ve computerized everything. The system tells you about maintenance needs and the transducers sense if pressure has changed or an oil leak occurs,” says Guillemette. There’s also a filter switch which tells you the filter is plugged and in need of maintenance.

Taking care of the machines so that they are in working condition is a key to Dakota Wood’s success. While some may cut corners in terms of maintenance, Guillemette is dedicated to it. He learned this lesson from his father who owned a ready mixed concrete company. His father preached the adage, ‘you have to spend money to make money.’ Guillemette says, “I know the grinders inside and out, take care of the machines, and pay for the warranty. It pays off because my customers know I’m reliable.”

As part of Dakota Wood’s contract with District Energy, they grind the biomass wood used to power all of downtown St. Paul. In the summer, that means grinding enough wood to fill 30 truckloads a day. In the winter, when the average high in January is just 26 degrees, the workload increases to 60 truckloads a day as Dakota Wood is responsible for grinding enough to heat all of downtown St. Paul and feed the electric grid.

Guillemette uses oil heaters and generators to run the ProGrind 5200 KBL all night and all weekend. If they turned the machines off, Guillemette says, the oil would be thick because of the cold, and the engine would not start. When the guys return to work the next day or Monday morning, the machines are ready to go – no worse for the wear.

Guillemette can’t say enough about Precision Husky’s treatment of him and his business. “I’m a good customer, and they take care of me.” However, what he most appreciates about Precision Husky is their machines. When asked what he would change about the ProGrind 5200 KBL, Guillemette thinks for a while. Finally, he says, “nothing.” The reliability of the machine has made Dakota Wood a company that its customers can count on.