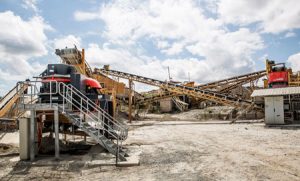 Recycling, or concrete and cement production is generally undertaken at specifically designed stationary processing plants. Here conveying systems are integral components of the entire set up, being vital to the entire operation of the plant.

Although the conveying systems used are often very similar, many manufacturers are developing systems to work in highly specialized ways and in a variety of industries.

A relatively recent development has actually seen excavated tunnel rock being used as a key component of shotcrete. Furthermore, tunnel projects are now often major sources of recycled aggregate and other materials, with the large amounts removed being used to form the sub base of connecting roads.

In recycling and demolition, much of the material processing is now being undertaken on site, although there are many specialized material processing plants that are designed to turn waste construction materials into reusable product. The often mobile nature of crushing and screening plants used in processing has led to a relatively recent development — that of tracked conveyors which are able to move and process in tandem with the tracked crushers and screens.

Conveying systems are in reality pretty similar. The equipment is designed to move material. Recycling conveyors — especially those dealing with demolition arisings — tend to be heavy duty, while conveyors and systems for finer aggregate and sand are more focused on ensuring the material is able to be moved speedily and safely with little or no spillage.

Although often not a primary part of their offering, most screening and crushing systems manufacturers offer ranges of conveying systems as part of their plant designs. These can be configured to the exact specifications of the customer and incorporate the full material processing solution.

Although the company divested much of its Mining Systems in 2017, Sandvik Mining and Rock Technology still offers conveying systems as part of its stationary crushing and screening offering.  This equipment is used in underground mines as well as tunneling projects. However, the main use is in aggregate plants. Sandvik has in recent years worked to develop crushing and screening equipment, which is ideal for manufacturing sand from naturally occurring rock, which is proving to be a significant improvement on the final concrete and cement product.

Primarily designed to get the rock out of a tunnel, in-tunnel conveying systems can also help transport material such as shotcrete to where it is most needed. Additionally, it should be remembered that the aggregate resulting from tunneling is a valuable resource, and is generally considered to be recycled aggregate. The ongoing undersea tunneling project in Norway has seen the excavated rock recycled and used as road aggregate, subbase and a constituent component of shotcrete.

One of the world’s leading manufacturers of tunneling equipment, the Robbins Company, is considered to be one of the foremost developers and manufacturers in the field. Involved in hundreds of tunnel boring projects around the world, the company also manufactures an extensive range of underground material excavation equipment designed for high speed tunneling operations.

A direct consequence of the company’s commitment to high speed tunneling is getting the cut rock or muck out of the tunnel as quickly and efficiently as possible. Robbins believes that muck trains used in conjunction with its TBMs must possess a high speed and high capacity in order to keep up with production. However, the company sees even with the best trains available, the logistics of keeping a high speed, multiple train system up and running on time is a complex management task that requires a great deal of maintenance and support.

This has meant that Robbins has invested in developing its own continuously advancing conveyors, which are designed to increase the efficiency of muck removal and vastly simplify tunneling logistics. With a reliable conveyor system constantly removing the rock from the tunnel, this means that trains are only required to deliver personnel and materials to the TBM.

Robbins conveyor systems have now been successfully employed on nearly 100 TBM projects worldwide, with the company claiming it has built and installed more tunnel conveyor systems than any other TBM manufacturer. Unsurprisingly, its conveyor systems are designed to support its own TBMs and are capable of moving more than a thousand tons of muck per hour, including up a shaft height of 656 feet (200m).

One such project that involved Robbins was the Indianapolis Deep Rock Tunnel Connector (DRTC), which is the first phase of a nearly 45km long network of deep rock tunnels being built 249 feet (76m) beneath Indianapolis, IN, by Citizens Energy Group.  The DRTC project itself comprises of a 7.5-mile (12.2km), 18-foot (5.5m) diameter tunnel constructed by S-K JV, a joint venture between J.F. Shea Construction and Kiewit Infrastructure Co.

Aiding the tunneling process is a Robbins designed and built conveyor system which has facilitated continuous tunneling in a difficult layout that included two 90° curves and two S curves.  Spanning 7.3 miles (1,7771m) in its longest iteration, the system included nine booster drives plus a main drive.  A vertical belt moved muck up the 656 foot (200m) deep shaft to a radial stacker for temporary storage, with the system being considered one of the most complex in North America, and the first to operate in 90° curves.

German company H+E Logistik has developed a reputation for providing contractors with excavated material removal systems capable of meeting even the most unlikely of requirements. Its conveying systems have been found successfully working underwater, in the centre of a city or high up in the mountains. Wherever they have been put to work, the company’s high-tech systems have ensured that projects are handled on time, even under extensive and extreme conditions.

One interesting development the company is particularly proud of has been that of its booster stations, which have enabled extensive conveying systems to operate even with the tight bends typical of modern metro tunnel construction and complex aggregate production facilities. Often found in large urban projects, the stations have proved ideal where space is limited but still require excavated material to be transported without impairing the surrounding infrastructure.  All the company’s conveying systems are available with an extensive range of accessories, including touch panel control and surveillance cameras, belt scales, metal detectors, overfill sensors, covering hoods for the upper belt and lower belt covers.

A relatively recent trend in conveying systems has been the development of tracked conveying systems. The use of tracked conveyors often means increased stockpile capacity and reduces on-site material handling while delivering full mobility. Although not able to deliver the same levels of production as stationary plants — nor are they designed to be — they offer other benefits which are now proving to be particularly beneficial to material processing and handling companies world-wide.

The range of Terex tracked conveyors can be bought from Powerscreen, Terex Finlay, CBI, EvoQuip, Terex Ecotec, Terex Washing Systems or Terex Minerals Processing Systems. Terex Ecotec’s Stacking Conveyor range currently consists of two self powered tracked options, 65ft and 80ft. Transport costs of each conveyor are kept to a minimum due to the compact transport design, allowing them to be easily tracked in and out of a 40ft container and shipped globally. A simple yet robust design allows for easy setup and positioning fitting the customers’ requirements. The 36.4.3kW (49hp) Deutz engine and powerful hydraulic drive deliver impressive capacities of up to 400tph.  The design also provides a full range of high specification options, including full under belt and head drum guarding, radio control movement and setup where required.

Terex’s relatively new 100ft stockpiler builds on the hugely successful 65ft and 80ft conveyors. The extra length of conveyor and increased power allows for maximum mobility and flexibility. The conveyor can cope with all applications, from light duty screened material to aggregate for cement and recycled concrete; in fact more or less any material it encounters.  The company’s tracked radial stockpiling conveyor has proved to be an ideal solution for stockpiling after mobile crushing and screening plants, with the mobility and flexibility of the conveyors reducing or eliminating the use of a wheel loader on site.

One of the early developers of tracked conveyors was Telestack, whose bulk material handling products are designed to handle all free flowing bulk materials including ores, coal, aggregates, fertilizers, grains, woodchips, pellets, etc. All the conveying solutions are designed to reduce the need for haulage on-site and support tracked crushing and screening operations.

Telestack states that it supplies the widest range of tracked stockpiling conveyors with lengths ranging from 50 feet (15m) to 101 feet (31m), able to deliver tonnages ranging from 100tph up to 1,500tph and lump sizes up to 12 inches (300mm). The company is also able to supply its conveyors in a “links” system, which aims to reduce or eliminate the need for truck or wheel loader haulage on site. The link conveyors can either be track mounted, fully self-driven or wheel mounted/towable wheel mounted. Furthermore its mobile and flexible products have been designed to reduce or eliminate degradation, segregation and compaction of material in the cement product process and to ensure only in specification material is fed into cement plants.

EDGE Innovate’s range of material handling equipment offers operators an efficient, reliable and robust material handling solution. The EDGE brand name is intrinsically linked to the manufacturing of mobile and track conveyors, feeders and radial track stockpilers, all of which have been designed to improve productivity and mobility while minimizing operator costs. The company states that as a leading manufacturer of conveying solutions, it is acutely aware that one style of conveyor is nowhere near sufficient enough to meet the differing requirements of each material handling operation.

Differing discharge heights, transfer lengths, condition of terrain, availability of power, the frequency of repositioning and throughput are all factors that must be taken into account when an operator is determining what solution meets all of their requirements. With a “one size does not fit all” mind set, the EDGE Innovate material handling range of equipment offers a wide range of stackers and feeders to suit specific material handling requirements including low-level feeder stackers and radial stackers, with the option of wheeled or tracked units.

Finnish crushing and screening giant Metso has developed its own tracked conveying system. The mobile conveyor adds flexibility to Lokotrack multistage crushing and screening applications and is said to enable easy and fast closed circuit operation even with special combinations. When in open loop, a high discharge height increases the stockpile capacity, and with an additional radial drive (on model CW3.2) the discharge end can be moved radially.

Its Lokotrack® CT3.2™ is powered by the CAT® C2.2 and for the wheel mounted CW3.2, a power pack is available as an option. Additional features include a rock box, impact bars and double drive making the CT3.2 an ideal conveying solution for different feed sizes and capacities. Both systems are easy and safe to use, especially when hydraulic tilting is applied. Spare and wear parts as well as Metso support are available as for any other Lokotrack crushing and screening plant.

Material is typically fed by conveyor into the feed chute and from there, material is conveyed onwards. Discharge height can be adjusted, and depending on feed material rock box, impact bars and double drive can be utilized. The conveyors are ready to use within minutes: drive it off the trailer, open tilt tail and discharge end, adjust the angle and start the conveyor. Track drive makes it easy to move on site just like any other Lokotrack unit.

More than just a conveyor

The complexities of modern quarries, recycling plants, tunneling projects and cement manufacture means that not only crushing and screening systems have developed but also the material moving or conveying systems. They must be tough for recycling applications, precise for moving fine aggregates for sand and have support systems that can repair any problems. Furthermore, tracked conveyors are now becoming more frequent in quarries, surface mines and construction projects with capabilities to match virtually any requirement.