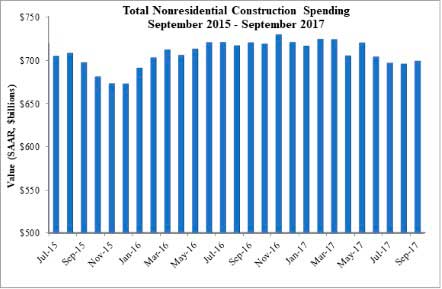 “There is a lot of positive news about the U.S. economy right now,” said ABC Chief Economist Anirban Basu. “The nation has added nearly 1.8 million net new jobs over the past year, the official unemployment rate stands at a 16-year low and asset prices have skyrocketed. Those factors have given American household wealth a boost. Despite all of that, nonresidential construction spending is down on a year-over-year basis by nearly 3 percent.

“Much of this is due to declining public spending in water supply and other public sector categories, but not all,” said Basu. “Key private segments like manufacturing and power have also experienced diminished construction activity. A likely partial explanation is the low commodity prices that characterized much of 2015 and 2016.

“At the same time, construction firms are boosting employment levels, with many firms reporting that the retirement of experienced workers is resulting in rapid hiring of other workers who are hopefully trainable, but who are not yet as productive on a one-for-one basis,” said Basu. “For many firms, this dynamic is likely squeezing profit margins. Many firms are also offering significant pay increases to their most talented workers to enhance retention and delay retirement.

“All of this is consistent with the notion that proposed policy initiatives that would better support U.S. economic growth remain important even in the context of an improving economy,” said Basu. “Beyond the tax reform initiative currently in the spotlight, one hopes that an infrastructure-led stimulus package funded primarily by private investors receives more focus during the months to come.”