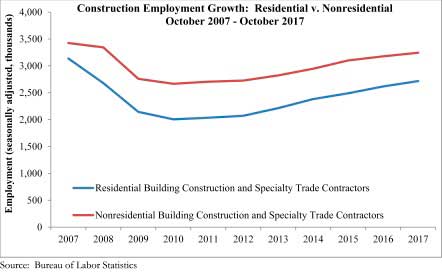 The construction industry unemployment rate, which is available only on a nonseasonally adjusted basis, fell two-tenths of a percentage point and stands at 4.5 percent. The official rate of national unemployment fell yet again, this time to 4.1 percent. Last month’s employment report, which indicated that the nation lost 33,000 jobs in September, was revised upward to a positive 18,000 net new jobs. This means that the nation’s streak of adding jobs each month has stretched beyond seven years. The nation is estimated to have added a total of 261,000 net new jobs in October. However, consensus estimates had suggested that more than 300,000 jobs were created in October, which means today’s report fell short of expectations.

“Since 2015, the pace of monthly job growth has been edging lower in America,” said ABC Chief Economist Anirban Basu. “This has not been attributable to falling demand for human capital, but rather expanding difficulty filling available jobs. The situation has become especially acute in nonresidential construction, as a large number of experienced construction workers head for retirement or perhaps for less demanding industries. A lack of ready and willing entrants into the construction workforce remains a source of intense frustration and growing alarm.

“In other words, the relatively small decline in nonresidential construction jobs in October cannot simply be interpreted as an indication that industry activity has slipped,” said Basu. “That is one possible explanation, but another is that demographics and other factors are countervailing efforts to replace departing workers. The construction unemployment rate is now well below 5 percent. Still another explanation is that October’s job loss is due to construction projects stalled by recent storms. That said, one cannot fully discount the notion that demand for human capital among nonresidential construction firms has slipped a bit given recent industry spending data that have been trending lower of late.

“Discerning the correct explanation is important. If October’s industry job loss was due merely to the dislocating impacts of storms, industry employment is likely to bounce back forcefully in upcoming months as rebuilding activities become more apparent,” said Basu. “However, if this is due to a loss of demand for workers as the construction cycle enters a new phase or if this is due to workforce demographics, employment growth will remain soft. In any case, the industry must continue to strive to expand industry labor force participation if the industry is to increase productivity and profitability.”