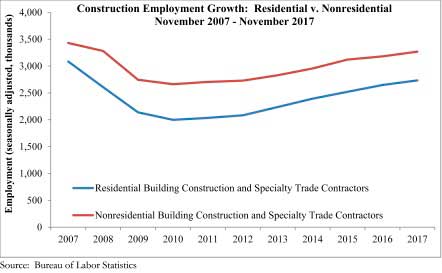 WASHINGTON, Dec. 8—The nation’s construction sector added 24,000 net new jobs in November, representing a 0.3 percent month-over-month increase, according to an Associated Builders and Contractors (ABC) analysis of Bureau of Labor Statistics data released today.  Nonresidential construction employment added 8,600 net new jobs in November, a figure that would have been substantially higher were it not for heavy and civil engineering, which lost 7,800 for the month. In October, nonresidential construction firms shed 3,600 net positions.   The construction industry unemployment rate increased by 0.5 percentage points and now stands at 5 percent. While this increase is likely due to seasonal factors, an increase in the construction industry unemployment rate is not necessarily a bad indicator given ongoing skilled labor shortages. The unemployment rate for all nonfarm industries—a figure that is seasonally adjusted—remained unchanged at 4.1 percent in November and remains at a 17-year low.   “Today’s employment report was quite good,” said ABC Chief Economist Anirban Basu. “The nation added 228,000 net new jobs in November, which makes it the second consecutive strong month for employment growth. Some of this performance may be attributable to interrupted hiring in August and September due to storms. However, for the most part, today’s report is consistent with long-term trends indicating strong demand for human capital and an economy poised to avert a downturn in the near term.”