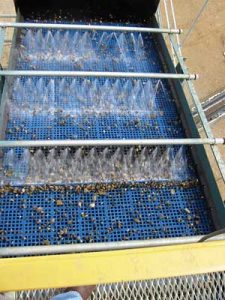 Often the most overlooked part of an aggregate operation is the screening circuit. However, getting this part of the operation done correctly can help avoid issues elsewhere in the plant, in addition to improving the quality of your aggregate, and increasing production capacity.

This is especially true in a wet screening operation, where you must ask yourself whether your water is working for you or against you. Significant amounts of equipment and manpower are dedicated to washing aggregate. Adding water to the screening process can double tonnage capacity compared to a similar dry application. Every ton counts, and every gallon of water used efficiently can help. Bob Kurz of Polydeck Screen Corporation offered some suggestions to consider regarding wet screening to a large gathering at the recent Aggregate Producers of Wisconsin Annual Convention.

The first area to look at is the feed. The screening process really starts before any material even hits the deck. A proper headbox slurry will have dramatic impact on the screening performance. According to Polydeck, a good rule of thumb for overall water volume to the screen is 5 GPM for every TPH. One third of that volume should be allocated to your head box/prewash.

The important thing is having enough clean water hitting the material at a high enough pressure to penetrate all the material. Adequate head box water increases both the efficiency (up to 50 percent) and the capacity (up to 100 percent) of screen decks by allowing fines to pass to the next screen quickly, allowing full advantage of screening square footage. The higher the fines content, the bigger the gains in efficiency and capacity will be.

If you can see fines compacting and pancaking across the top deck, it is immediately clear that improvements can be made. Also, check to see if water/fines are hitting the first portion of the bottom deck feed end to measure if material is passing quickly enough. Any fines buildup would be an issue too, and would likely show up in the 200 wash.

The other two-thirds of the water should be allocated to the spray bars. This seems to be one of the more common areas that can be overlooked. The production season moves quickly, and there are always tradeoffs between production and maintenance. A spray bar doesn’t get much maintenance attention when a loader or crusher is down. Middle deck inspections aren’t much fun either. However, making sure the spray bars are clean and working properly will pay dividends. Pumps and fresh water supply are some other factors worth inspecting if there are constant issues with spray bars.

Determining which is the critical deck will help in identifying the best locations for spray bars. Decks will not all need the same amount of water. Generally, the critical deck will need more water than the others. Bottom decks are often the critical deck. This means water will need to penetrate a deeper relative bed depth (which should, for best results, be kept to a ratio of 4:1 between bed depth at discharge and the aperture — meaning a 4 inch bed depth for a 1 inch aperture size). The smaller particles on the bottom deck have much more surface area compared to the larger aggregate, making them more difficult to penetrate with enough water when the bed depth becomes higher. This is where understanding specific feed gradation and product splits will help to determine the critical deck and also help maximize product yield.

However, if there is heavy clay adhering to feed material — or even clay balls — allocate the most water to the top deck, which will be the critical deck in this case. Clay is more difficult to remove from aggregate than rock dust and can tend to clump into balls because of its inherent moisture. You’ll want plenty of water on the top deck to allow a head start on loosening the clay and breaking up any clay balls. In fact, for wet screening to separate rock from clay, the recommended water usage is the highest of any aggregate application: from 5 to 10 gallons per minute per STPH of feed to the screen. In this case, focus the water and water pressure on the top deck and add more spray bars and/or nozzles, to that deck.

Spray bar nozzles should be oriented at 45 degrees back toward the feed end of the screen. This helps create a water dam to slow the material, increases the retention time and helps turn the material for effective washing. If you’re having problems creating a water dam, which happens most commonly on inclined screens, you could consider adding screen media with dams already built into them. Dams on the discharge end can also help drain your decant water too. Otherwise, a slot or VR/Zig-Zag style aperture — which can be 20 percent more efficient compared to standard square aperture — could do the trick. However, avoid these if flat and elongated material passing would be an issue for your product gradation and/or quality.

Two of the most common issues with wet screens are easily correctible.

If you can get consistent 40 PSI at the spray bar nozzle, you’re doing great. Water pressure that is too low at the deck can create a variety of problems, including failure to create a water dam and to break up lumps and clay balls. A pressure of 40 PSI at the screen, on the other hand, removes fines more efficiently by penetrating bed depth.

Selecting non-corrosive nozzles that are labeled self-cleaning or easy to clean will avoid a lot of problems. Use cleaning/blow out valves and have a regular inspection and cleaning schedule. Using a pump strainer can also help to prevent plugged nozzle problems.

Screening efficiency and capacity will also be affected by particle size vs. the screen aperture size. If a piece of aggregate is about half the size of the apertures, it may need to pass over only 4 holes before it falls through. If, however, much of your feed is approaching the size of the screen apertures, a given piece may need to pass over thousands of holes before it passes through to the lower deck, making screening a much slower, less efficient process. Understanding your half size and near size material within feed gradation will better equip you to attack the critical decks for increased efficiency.

All of Polydeck’s modular synthetic screen media used in North America are produced in the USA, at the company’s home base in Spartanburg, SC. Founded by a South African immigrant who settled in Spartansburg, the company celebrates its 40 anniversary in 2018. Devoted solely to the production of polyurethane, rubber, and mixed screen media for use in the aggregate, coal and mining industries, Polydeck has over 1000 different screen design options, with varying fastenings, integrated surface features and sizes and shapes of openings.

Their R&D department, with the help of a multi-national customer base and the Polydeck sales and applications teams, focuses on innovation with the goal of solving even the toughest problems in the screening of aggregate. For more information, visit their website at www.polydeckscreen.com.