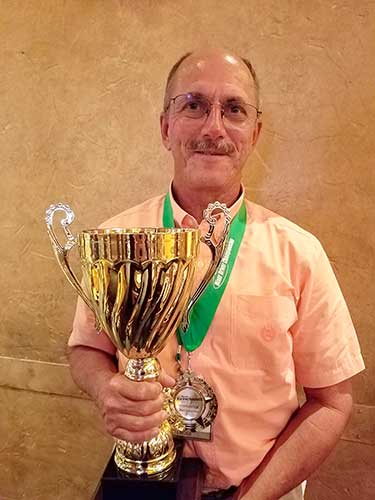 Six CEMEX drivers — including Mangold — competed against roughly 90 drivers from across the country at the championship, which took place during the NRMCA’s Concrete Works 2017 convention. Drivers were judged on vehicle-handling skills, vehicle-inspection abilities and grades on written exams. Mangold received a Runner-Up trophy during an awards ceremony on October 2 for his performance at the championship. He is a driver trainer from Cocoa, FL, with more than 20 years of experience driving mixer trucks and more than 30 years with CEMEX.

“CEMEX drivers are the best in the business by consistently maintaining high standards of safety and professionalism while delivering quality products and superior customer experiences,” said Kirk Light, CEMEX USA’s Regional President for Florida. “We’re very proud of Dave Mangold and all of our drivers who represented CEMEX in this competition, just like we’re proud of the work they do every day for our customers.”

This was the third time in as many years that Mangold received recognition from the NRMCA. In 2016, he was one of two runners-up for the association’s Driver of the Year award, and he placed fourth in the 2015 National Mixer Driver Championship.

Five other CEMEX drivers — Thomas Comeau of Marana, AZ, Robert Creekmore of Bakersfield, CA, Stan Gonzalez of Pleasanton, CA, Grigor Khachatryan of Los Angeles and Fernando Lopez of Rialto, CA — also competed in this year’s NRMCA championship. Each driver had to earn first or second place in a state association mixer driver competition or intra-company driver competition to qualify for the event.