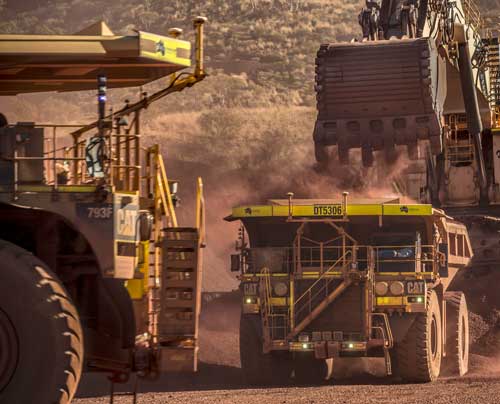 Caterpillar and Fortescue Metals Group have reached agreement for the expansion of Cat® Command for Hauling at Fortescue’s iron ore mines in the Pilbara region of Western Australia. This will include retrofitting approximately 100 Cat 793F and 789D and Komatsu 930E truck models at the Chichester Hub, as well as an expansion of the Cat 793F autonomous truck fleet at the Solomon Hub operations.

The Command for Hauling system is built on a foundation of the other Cat MineStar™ System capability sets, Fleet, Terrain, Detect and Health, which will be utilized across the mobile equipment fleet, including support equipment and light vehicles. Caterpillar is working closely with Fortescue, Thiess Contractors, and the Cat dealer in Western Australia, WesTrac, to provide a solution for managing, operating and supporting Cat MineStar System and Command for Hauling.

“Caterpillar is pleased to build on the success we have had working with Fortescue to implement autonomous mining solutions,” said Jean Savage, Caterpillar vice president with responsibility for the Surface Mining & Technology Division. “Working with all the partners, we look forward to growing the entire MineStar suite of technology products throughout Fortescue’s operations and working with them to drive process efficiency, increase productivity, lower cost per tonne and enhance safety.”

Nev Power, chief executive officer of Fortescue said, “Fortescue values the strategic relationship developed with Cat since 2012, as autonomous haulage technology has been implemented at our Solomon Hub, achieving a 20 percent improvement in productivity. We will continue to work together to ensure the next stage successfully builds on the safety, productivity and efficiency gains we have achieved so far.”

“By harnessing leading edge technology, supporting the skills development of our workforce and collaborating with our suppliers, we will continue to deliver ongoing cost reductions, ensuring we remain at the lowest end of the global cost curve,” Power said.