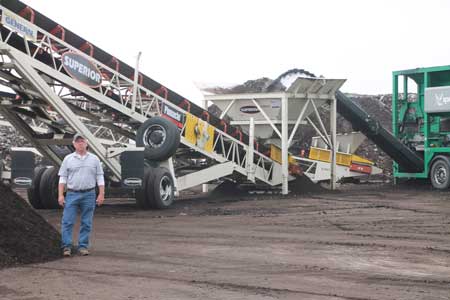 In 2011, the Shakopee Mdewakanton Sioux Community (SMSC), a federally recognized tribe near Shakopee, MN, began what would soon become a large-scale composting operation. The business fit in well with the Dakota tradition of caring for the earth: waste materials would be used to create a valuable product instead of otherwise ending up in a landfill.

Starting from scratch on a small portion of what is now a 300-acre tract, the tribe’s Organics Recycling Facility (ORF) quickly became one of the largest producers of compost in Minnesota. The ORF made the wise decision to produce compost in a number of specially designed blends for different potential uses.

The compost is produced year-round, 24/7/365 — straight through the frigid Minnesota winters — and is sold as quickly as it can be produced.

The ORF has purchased high-quality, efficient machinery in order to produce top-quality compost. Much of their equipment is manufactured by Komptech; including their top-of-the-line Topturn X67 windrow turner, MultiStar L3 screener for processing finished compost, and hybrid Crambo 5000 slow speed grinder.

The compost windrows — 500 feet long by a maximum of 10 feet tall and 18 feet wide — contain only organic materials, including ground-up yard waste and municipal wood waste (from trimmings and storm damage, for example, and 6,000 Christmas trees last year). Unlike some composting operations, the ORF also accepts food waste from several school districts and local restaurants, as well as produce from large area retailers. “If it was living in our lifetime, the ORF takes it,” grinned Al Friedges, who has energetically served as manager of the facility during its rapid growth. In keeping with the tribe’s Dakota tradition of environmental stewardship, 144 roof-mounted solar panels supply electricity for the main shop building.

Local resources include manure from the nearby Canterbury racetrack, which seasonally houses up to 1,800 racehorses — 7,668 tons of it in 2016. Several nearby dairy farms also contribute manure for composting.

“Everything entering the facility is scaled in,” explained Erin Longmore, environmental compliance specialist. All compost inputs are carefully checked for contaminants, including plastic, metal, rocks and glass.” When a truckload of waste organic material, such as food waste, arrives at the scale house, Longmore comes to check the contents. Often food waste (referred to as “source separated organics”) comes in compostable bags, and the contents are checked for contamination. The load must contain no more than 5 percent contaminants. Any load that exceeds that percentage is rejected.

The Komptech Crambo 5000 then grinds all accepted loads to create a mixture of food waste, yard waste, and ground wood that is put into windrows. Other grinders are taken off-site to grind waste wood at 16 partnering municipal wood sites, and the ORF also grinds waste wood in other parts of the state. Residents of Scott County can drop off their yard waste, in specified spring and fall months at no charge.

Friedges, who handles sales for the facility, explained, “We cater to several large-scale commercial compost buyers as well as smaller companies, landscapers, and residents. For smaller buyers, we hired a company to bag some of our compost. Next year, we will sell bags of our compost under our own brand, Dakotah Roots, in the tribe’s convenience stores. Dakotah Roots carries the US Composting Council Seal of Testing Assurance. Big box stores are not on our marketing horizon at present, but for the future, who knows? We don’t want to agree to supply bigger companies until we’re sure we have the necessary resources, and that we are able to produce on a larger scale and still do the job right.”

Offering a variety of compost blends has proven to be a good marketing tactic. The ORF is also considering future opportunities, including mulch and bedding. As the operation works to grow and update equipment, Friedges makes recommendations to the tribe for consideration. “We put together a plan showing the expected return on investment, and the tribe’s Business Council makes a decision.”

The ORF is tracking material in two research windrows from the tipping yard through screening and loading to determine the hours of personnel time and fuel that are invested in each row. When a 900-ton windrow is screened, only about 50 percent of it screens out as finished compost. The remainder is reused in the composting process.

“Once the compost has originally been mixed and formed into windrows, it takes about 70 to 90 days of active composting time to break down,” said Longmore, who does the regular testing needed.

“Temperature is all-important to active composting, which must produce sufficiently high temperatures (from 131 to 160 degrees) to kill any pathogens. We have to hold the compost at above 131 degrees for at least 15 consecutive days to meet PFRP requirements for further reducing pathogens. A minimum of five turnings of a compost windrow at temperature is also required. I monitor temperature three times a week at six different places in each windrow.”

Using an oxygen probe, Longmore also checks that oxygen levels are kept above 5 percent to ensure aerobic composting, checking at three different places per windrow. “If the oxygen is running low, we turn up the compost with the windrow turner to introduce more air.”

Moisture level is also crucial to proper composting. “If the moisture starts to drop below 50 percent, we turn on the drip irrigation line running along the windrow for a day,” explained Longmore, who tracks all testing results electronically.

“Our compost is STA certified, through the US Composting Council,” continued Longmore. “The certification requires us to send a sample every month to a soil lab in California. The lab’s results allow customers to compare our products with the products of other comparable facilities. From lab reports, we can disclose the nutrients and the presence or absence of heavy metals and fecal coliform and other bacteria in our compost.”

“You might say,” added Friedges, “that if we were playing a card game, we would be playing it ‘with all our cards face-up.’”

When decomposition slows, after the requisite number of days at high temperatures, the compost is screened using a 3-deck Komptech screener into three sizes. A series of spinning stars help to move the compost through the screens to separate the sizes: finished compost (1/2 inch and smaller); seconds (medium-sized material); and overages (large material used as a bulking agent). Seconds and overs are then reincorporated into the windrows to be broken down by further composting. In 2016, the Organic Recycling Facility took in a total of 155,747 tons of waste material to be recycled, using it to produce valuable products, while preserving precious space in area landfills.