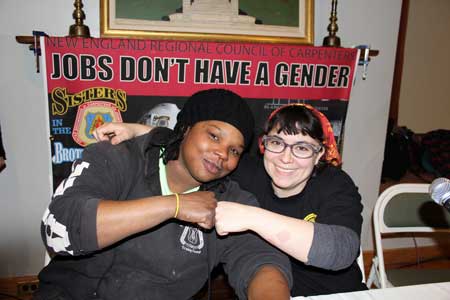 Local 336 has 2,000 members. Formerly Springfield Local Carpenters Union 108; in December 2017, 108 was incorporated with 107 and 475, and became Carpenters Local 336 — covering all of western and central Massachusetts, west of Framingham. Currently the number of women working in the trades is less than three percent nationally. For Local 336, 2.5 percent of its members are women.

Several of them were on hand recently for a standing room only talk entitled “Equity in Construction” at Williams College in Williamstown, MA. Over 200 students crowded into Mission Dining Hall to listen to the Union’s pioneering tradeswomen who have persevered despite barriers (preconceived or subconscious) of sex and color to earn a living within the trades.

“Carpentry is a viable field. If you can carry your four year old in his dead sleep to his bed at night you can carry a 4 by 4,” said Thompson.

After graduating from the carpentry program at Franklin County Technical School (FCTS) in 2002, Thompson was employed by an innovative company, Ingenuity Wood. “Then they went under. I had relatives — all in the union. They said, ‘Hey, try this’,” so she joined 108. In 2017, she was elected 108’s Steward of the Year.

After 15 years in the trades, Thompson is the only woman she knows of who returned after having two children — now six and four. “I took a ten month layoff to have my first kid,” she said. “We are out to make it work.” Currently she does drywall construction for Professional Drywall Corporation (PDC) at UMass’s Isenberg School of Management, installing and framing soffits.

“My daughter says I get up in the middle of the night to go to work. Dad can fix anything and Mom can build anything.” When Thompson joined the union, “Not only was I the only woman carpenter on the jobsite, I was the only one in the state.”

Standing a little over 5’1”,“I’m a little pipsqueak. I spend a lot of time in small spaces. That can be a strength for women carpenters,” said Thompson.

“I’m making really good money. For 15 years, there was never more than one woman in the union with me.”

Boucher shared, “I wanted to be a carpenter since I was a little girl.” After graduating from Smith Vocational’s carpentry program, she went to jobsites seeking work. “No one would hire me. I went into the military to be a carpenter too — that didn’t work out.” Joining the union opened “so many doors, so many opportunities. I don’t have a Bachelor’s Degree but I’ve had so many opportunities to do things. I can’t say enough about how thankful I am.” She’s now a proud homeowner.

“I wasn’t even thinking about carpentry,” said six-year carpenter Robinson. “I was on the party bus” when it passed the union building and someone mentioned she could join. “Thank God I went on that party bus.” She has since bought a house for herself and her nine-year old son. “When my son says, ‘I’m going to be a carpenter,’ I say, ‘Son, be an architect’.” When her son said, “‘Mom, you built a hospital,’ I said, ‘Yeah. Architects draw it and we build it’.”

Copeland explained, “I was a vegetable farmer in the valley for four years and broke all the time. As a farmer, I knew I could get up early and work hard. I’ve worked with men all my life and decided I have to try it. Now, I’m financially stable, don’t have to worry about making rent and have amazing insurance.”

“We do a lot of recruitment at job fairs for girls in the trades,” said Clauson, such as North Adam’s McCann and FCTS. They recently bused students to Springfield Tech to meet tradeswomen.

“There’s 150 men on my jobsite and two women,” said Boucher. “It’s difficult being one of two women on a jobsite. They’re watching me 10 times more than the other guy. I’m used to guys saying, ‘You don’t belong here.’ I don’t have to change their mindset [that I don’t belong there]. If more women were on the jobsite, it would have to change. We’re kicking butt and it’s awesome. It’s great to get more jobs that require diversity.”

“There has been a tremendous amount of sexism,” said Clauson. “We’re working to tackle it. It can’t be changed just through recruiting more women. For years, we just focused on recruitment but the numbers didn’t change, and people didn’t stay. What has worked is when owners of construction sites say we need you to include women and people of color.”

“It’s been 10 years that I’ve been one of three women on a jobsite,” explained Thompson. She feels the casino is driving some of the recent diversity. MGM Springfield has a diversity requirement of 6.9 percent women, 15.3 percent people of color and 8 percent veterans. UMass has the same, but no veteran requirements.

“Currently Williams College hasn’t required diversity,” said Clauson. “Over the past five years, they have done approximately $780 million worth of work at the college; half the work is done union, half non-union. They have no diversity requirements.”

Robinson, a recent Local 336 Steward at MGM Springfield, said, “(I’ve) never seen so many women on a jobsite. Six years ago, you’d never see another woman. You have to have a thick skin — a real thick skin. There are a handful of good men out there [and a] handful of bad men. It’s the ones that have daughters that have the best attitude. I looked at my first paycheck and I looked at myself and I said, ‘I don’t care about your drama, I’m here for my family’.”

Thompson said, “The awareness factor is the biggest thing. I worked for 13 months at Mt. Holyoke College. They had no idea women could be on board.”

“Each of the workers here are offered free classes (through the Union) on knowing the latest materials. It makes her more marketable,” said Clauson.

“We try our best to build America,” said Robinson.