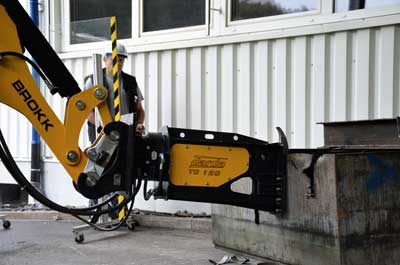 The 47-by-17-inch TC120 Tank Cutter is used with the Brokk 160, 280 and 400 models to deliver extraordinary precision. The TC120 brings flexibility to the jobsite with its hydraulic rotation capabilities and five-inch-wide jaws. It exerts 75 tons of cutting force at 7,250 psi to easily cut through half-inch thick steel plate.

Although this attachment can be used in a variety of applications, such as in salvage yards and balers, it’s commonly employed for cutting steel tanks, pipes and vessels.

“This revolutionary product defines versatility. It combines power, efficiency and, above all, safety,” said Mike Martin, Brokk Inc.’s vice president of operations. “Safety is vital. When cutting tanks, you never know what you’ll run into. You don’t have to worry about that with the Brokk machine and TC120 combination. Since it’s electric, you reduce the risk that comes with cutting into potentially flammable tanks.”

In addition to heightened safety, the TC120 improves productivity by continuously cutting steel.

“For the first time in the industry, there’s a safe, easy, high-productivity option for cutting steel,” Martin said. “Combining the Brokk machine with the TC120 attachment is like powering a giant scissors — it slices through steel like a scissor to paper.”

The TC120 attachment also benefits contractors with its extended reach. Brokk machines’ remote capabilities, coupled with arms that extend as far as 27 feet, easily reach places others can’t, improving efficiency while minimizing labor costs. Because it’s attached to a Brokk machine, it reduces the risk of injury to laborers by eliminating the need to climb scaffolds and ladders with torches to get to hard-to-reach spaces.

The TC120 is one of many Brokk attachments that can be quickly interchanged for greater versatility on a jobsite.
For more information: info@brokkinc.com; www.brokk.com.