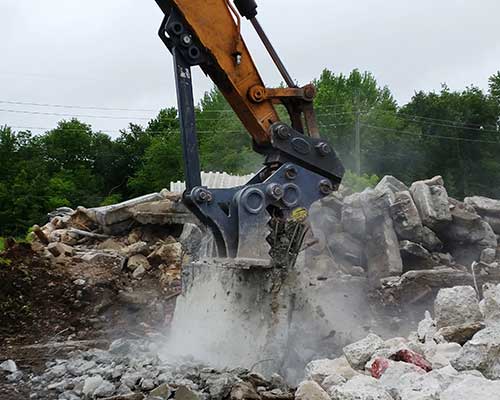 Britton Industries recently acquired a diverse spread of Strickland attachments from Ransome Attachments as part of a carefully orchestrated equipment acquisition strategy. The move is one part of a comprehensive effort to improve the operational efficiency of its four locations in New Jersey and Pennsylvania.

This fast-paced recycling operation, founded by Jim Britton nearly 30 years ago, furnishes the Central New Jersey and Eastern Pennsylvania landscaping and construction markets with aggregate products, screened topsoil, mulch, and leaf compost. Britton accumulated a hodgepodge fleet of equipment as his fledgling business expanded rapidly year after year. His philosophy was to buy inexpensive, primarily used, equipment from various sources to tackle a wide range of projects as needed.

The hard-nosed businessman scrutinized his now mature business in early 2017. “It’s a volume game,” Britton said of his operation. “We need to weed out the inefficiencies and keep plugging in new efficiencies.”

Britton understood that material prices were fixed and recognized the exceptional quality of his team. Standardizing the brands, sizes, and interchangeability of the equipment throughout its locations was the obvious answer.

Britton began the standardization process by acquiring 17 CASE wheel loaders and excavators to distribute across his yards. He had the excavators fitted with Strickland S – Type quick couplers and the wheel loaders with Volvo roll-out buckets and couplers. Having sturdy attachments that would be quickly interchangeable between machines was critical, so Britton approached Lumberton, N.J. based Ransome Attachments to buy an assortment of Strickland grapples, stump splitters, pulverizers, and buckets. Ransome is also assisting with the replacement of roll-out buckets for the wheel loaders and hammers for the excavators.

Britton has used an “infinite” number of attachment brands and sizes and has owned hundreds of pieces of equipment. “I would put Strickland up against all of the brands we’ve worked with: design, durability, you name it,” he said. “And I put my money where my mouth is.”

The Britton team works at a breakneck pace to maintain production so the Strickland attachments take a heavy beating in this volume-driven environment. Whether that involves breaking a five-foot hunk of concrete with rebar down to one-inch, or turning an eight-foot-diameter tree stump into mulch, the process must be efficient and cost-effective.

“The abuse these attachments take is extreme,” Britton said. “They’ve (Strickland) done a really good job with the engineering and durability.”

Britton considers serviceability even more important than the equipment itself and recognizes that every dealer has a different philosophy. Although his relationship with Ransome Attachments is new, he expects it to last. “Honestly, I wish I had been doing business with these guys 20 years ago,” he said.

The equipment standardization process has resulted in the hauling of attachments, not machines, between facilities. Britton views this as the beginning of an ongoing quest to further eliminate downtime. His long-term vision involves having a comprehensive spread of Strickland attachments at each location to eliminate transportation altogether.

“You need to be able to nail your process down to the penny and make sure you’re using the same process in every location,” Britton said. “Now we have a standard and we’re going to expand on it.” With equipment utilization soaring from roughly 50 to 90 percent, it would appear that his strategy is off to a positive start.