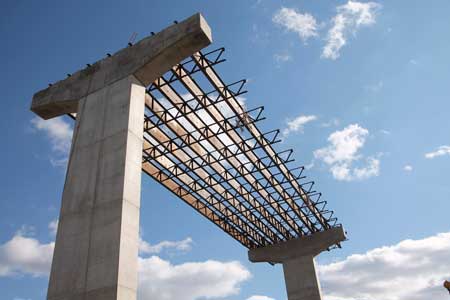 The expansive bridge over the west branch of the Susquehanna River just south of Lewisburg, PA is the centerpiece of the Central Susquehanna Valley Transportation Project (CSVTP).

The bridge piers rose to their current heights, in 28-foot high concrete pours through much of this past winter — an exceptionally cold season for central Pennsylvania. At times the area experienced 12-inch thick ice on local lakes and temperatures in the sub-zero range. But even with time off due to heavy snows and high velocity winds, workers kept those concrete bridge piers rising, some to the ultimate 180 feet needed to support the nearly mile-long bridge deck.

Hydronic ground heaters from Wacker Neuson have made all the difference in allowing winter excavation to proceed despite frozen ground and in allowing concrete to cure properly at virtually any ambient temperature. The winter construction of piers and abutments benefitted from the hydronic heat of Wacker Neuson E-3000 ground heaters.

“For cold weather concrete curing, the contractor sets the temperature of outgoing hydronic fluid from the E3000 at a max of 180 degrees [Fahrenheit] and then adjusts downward until the contractor’s embedded concrete temperature sensors indicate the desired job-specified, concrete curing temperature,” explained Luke Sevcik, product application and training specialist at Wacker Neuson Sales Americas, LLC. “The amount of temperature adjustment required depends on the ambient air temperature and the distance the E3000 is located from the poured concrete” — such as high hose runs up to a bridge pier. Wrapping the heater hose between E3000 and the concrete pour with insulating blankets reduces heat loss, which saves time and money.

The Wacker Neuson E3000 comes with 3,000 lineal feet of hose that is filled with a glycol/water mixture, to be heated by a burner inside the easily portable machine. The desired temperature is set with the push of a button and then the hose is laid out on frozen soil in back and forth loops with the loops about one and a half feet apart for most ground thaw applications — or one foot apart for vertical thaw applications.

Although high-velocity winds are able to shut down work, online drone videos reveal workers laboring atop the piers secured by a SecuraSpan™ Horizontal Lifeline Assembly even on gusty, bitterly cold days.

Down on the ground, frigid temperatures did not deter workers constructing complex rebar reinforcement structures aided by a Terex rough terrain hydraulic crane, which moved the needed sizes and shapes of rebar into place for each section of reinforcement.

The immense piers for this gargantuan project need strong reinforcement. The concrete and steel piers will have to sustain the weight of massive steel girders supporting the four-lane, 4,545-foot bridge deck, as well as the expected weight of the cars and trucks traveling this badly needed section of the interstate system through this area of the Appalachians. The Route 15 bypass will provide the last piece of uninterrupted four-lane driving from central New York through central and southeastern Pennsylvania.

The pouring of each of the piers — varying in height according to the terrain — began with an excavation 20 feet below the surrounding ground surface. The piers are well anchored in the earth and reinforced with rebar beginning at the base.

As the piers grow upward the concrete pours become more time-consuming. Carefully scheduled concrete trucks line up in steady succession near the base of the column being poured. For winter, the concrete is mixed using warm water.

The warm concrete is then poured into pre-warmed forms and rebar, thanks to the hardworking Wacker Neuson E3000 hydronic heater, ensuring that conditions for proper curing would be present right from the start.

The skilled operator of a lattice boom crawler crane lifted the American-made Gar-Bro Manufacturing Co. concrete buckets to workers atop the pier, who centered each bucket over the current pour area and made sure it would be releasing its concrete vertically — a vital detail in this type of concrete pour. As the crane operator held the boom steady, workers opened the bottom of the bucket — making sure the concrete continued to flow vertically. After the bucket was empty, it was returned to its position on the ground ready to be refilled by another incoming concrete truck while a worker atop the pier vibrated the newly poured concrete to release bubbles and consolidate it with the previous pour.

Then the crane operator picked up the next filled bucket and started its ascent once more — slowly and carefully — to the waiting laborers. The addition of pozzolan cementitious materials and vibration of the concrete between pours help to ensure the concrete cures into a strong solid mass over the rebar reinforcements without weak points or air pockets even in very cold weather

Online drone footage reveals workers on top of the tall piers moving insulating blankets into place on the poured surface. Black plastic covered both the insulated sides of the form surrounding the 28-foot-tall section as well as the top when all of the pours had been completed. The plastic sheeting prevents excessive moisture loss and helps to trap the natural heat of hydration produced by the curing concrete.

Fourteen bridge piers are needed to support the bridge deck over the west branch of the Susquehanna River. As of early spring 2018, four piers were completed and four more were close to completion. Some of these piers were constructed on a gravel and rock causeway extending into the river channel.

When the piers currently under construction, plus a 9th pier have been completed, the whole causeway will be removed. Then a new one will be built into the opposite side of the Susquehanna River so the remaining piers spanning the river and leading onto the Northumberland side of the project can be built.

The construction of the bridge itself is expected to cost about $157 million out of a total estimated cost for the bypass of $670 million.

In late February, as some bridge piers were completed, the first of the girders, from High Steel Corporation in Lancaster and Williamsport, PA arrived on site. Excitement was high as two cranes —Manitowoc and Liebherr lattice boom crawler cranes — slowly and carefully with exquisite coordination of experienced operators, lifted the first of the preassembled steel girders into a perfectly horizontal position for Span 6. The cranes — equipped for the task with their maximum main boom length plus fixed jibs for added height — worked in tandem; each crane supporting an end of the giant girder as it was secured into place.

Since then more girders and other steel parts have been lifted to the bridge deck. Bridge completion is expected by 2020. The bumper-to-bumper, stop-and-go traffic through small towns on this section of Route 15 will become a thing of the past and cruise control at highway speeds will become the norm for the whole length of the route from central New York through central Pennsylvania and beyond.