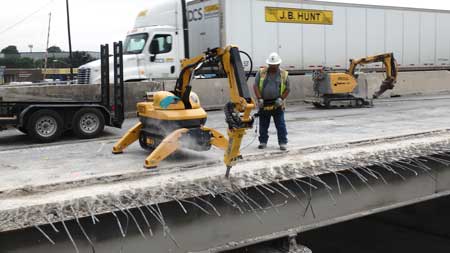 If there’s one thing most people can agree on, it’s that being stuck in traffic is incredibly annoying. It was a problem the Texas Department of Transportation was dealing with on the state’s 47th most congested roadway. Cars take about 185,000 trips on the 4-mile-long stretch between Loop 410 NE and Loop 410 S on I-35 in San Antonio daily. The rising congestion levels and demand from area stakeholders made improving the section a priority.

Travel times rose as much as 65 percent during rush hour. Not only that, ramps on opposite sides of the interstate caused additional congestion and safety issues. I one section, trucks entering were commonly forced to immediately cross all lanes of traffic to reach their exit.

TxDOT officials decided on a plan to add one additional lane in each direction, expanding the road to eight lanes, as well as realign several ramps. In addition, the Department of Defense granted $20 million for the construction of a direct connector for southbound I-35 to I-410 to reduce congestion for traffic headed into the U.S. Army’s busiest hospital complex, the San Antonio Military Medical Center. Overall, the improvements would enhance safety and traffic flow and increase operational capacity by about 33 percent.

Several sections along the stretch required widening bridges, and one section involved filling a 20-foot gap between two parallel bridges above a busy highway to allow for the additional lanes. The section also called for a new auxiliary lane. To complete all of this, concrete rails and some of the bridge deck concrete needed to be removed. Lane Construction hired San Antonio-based demolition contractor JR RAMON for that portion of the project, as well as several other bridges.

Before connecting the bridges, the contractor would need to remove 3-foot-tall, 1-foot-thick, rebar-reinforced concrete rails and three stretches of 400-feet-long, 3-feet-wide and 6-inch-deep concrete bridge decks. Two of those stretches were on the inner sides of the bridges and one was on the southbound side’s outer section. Each stretch needed to be removed in just three days to minimize traffic impact and, to make it more challenging, the two layers of 3/4-inch rebar needed to remain undamaged so Lane Construction could reuse it to tie into the new concrete decking.

JR RAMON’s demolition crews started with the outer section, using an 80,000-pound Komatsu PC360 excavator with a CAT pulverizer attachment to reach up and demolish the barriers from the roadway below.

Next, they removed a 400-foot section of concrete from the southbound bridge’s outer bridge deck. JR RAMON used the excavator and pulverizer attachment to weaken the concrete up to the saw-cut concrete line on the first section before workers with hand tools removed the concrete.

The excavator made quick work of removing the concrete but heavily damaged the rebar in the process, twisting, denting and snapping much of it. TxDOT assessed the rebar and determined it would need to be replaced because it didn’t meet specifications. The process to patch up the rebar was expensive and time consuming, setting the project back several days and costing more than $100,000.

JR RAMON President Timothy Ramon knew he had to find a way to complete the inner section without causing the general contractor the same headache twice. He also wanted to reduce the labor costs involved with having so many workers remove concrete with hand tools. He turned to Brokk, a manufacturer of remote-controlled demolition machines that had previously helped him solve a complicated project.

“We bought our first Brokk machine, a Brokk 160, in 2012 for a concrete silo job that required precise demolition from the top down,” Ramon said. “The unit was so productive that it nearly paid for itself on the first job. I wanted that same type of precision for this project.”

Ramon had considered using the B160 for the outer bridge section but realized the electric-powered machine’s cords and generator would clutter the single lane of traffic they would be working in, creating a logistical problem. After realizing the high costs of using the excavator for the work, he decided to purchase a new Brokk 120D specifically for the inner sections. The diesel-powered, cordless machine can run as long as eight hours on a full tank.

Armed with this new tool, JR RAMON took on the inner sections of the two bridges. Crews again used the excavator to remove the concrete rails, but then moved in with the Brokk machine to demolish the bridge deck concrete. An operator used the B120D’s remote control to direct the powerful and precise three-part arm with an Atlas Copco SB 152 breaker to remove the concrete while avoiding the underlying rebar.

The general contractor had a mini-excavator with a breaker attachment on site, so Ramon’s crew also used that to remove concrete. They soon realized that although the machine featured similar power to the Brokk, it lacked the necessary precision for the job. Ramon said because of the machine’s small size — it’s barely 30 inches wide — they had been skeptical that the B120D could achieve the production rates they needed along with the precision to leave a clean, straight edge, but they were blown away by its performance.

“There was no comparison between the two pieces of equipment. We actually had to use the Brokk machine to clean up and finish the work on the sections where we used the mini-excavator,” Ramon said. “The B120D allowed us to complete the inner section twice as fast as on the outer section while leaving the rebar undamaged. We had a crew standing by with hand tools just in case the edge needed to be cleared of loose debris but, thanks to the machine’s precision, we never needed them.”

In addition to leaving the rebar untouched, the machine greatly increased productivity. Unlike workers with hand tools, the B120D didn’t fatigue, meaning the operator could work a 14-hour shift without tiring from both the work and the Texas heat. This increased productivity as well as safety by eliminating mistakes and injuries caused by tired workers. The operator stood about 6-feet away, monitoring the work a safe distance from flying concrete as well as the 20-foot drop to the road below. Ramon said the setup saved him the three or four hours it would have taken in each section just to install tethers for workers.

The B120D also saved Ramon considerable time and labor when his team discovered the inner section cut line on the northbound bridge was off by two inches. Ramon said he operated the Brokk himself to break the remaining concrete in just six hours — a task, he said, that would have taken 20 workers with hand tools to complete in the same amount of time.

Even with the extra work, JR RAMON crews finished the inner section in just 1.5 days, including cleanup time. In comparison, the outer section took six days. Between the outer and inner sections, JR RAMON removed about 1,050 tons of concrete.

Ramon said the new equipment reduced his labor costs on the second section by 90 percent and strengthened his relationship with the general contractor, making his company a more likely choice for future jobs. He added it also helped his ultimate goal of always improving safety while increasing his bottom line.

After JR RAMON finished its portion, Lane Construction continued working on connecting the bridges as well as completing the other traffic improvements. The original overall project completion estimate was November 2016, but delays moved the expected date to late 2017.

Aaron Boerner is a writer for the construction, demolition, landscaping, mining and aggregates industries.