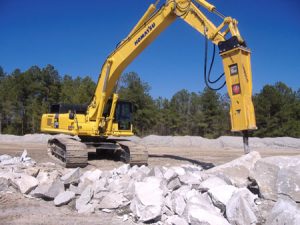 Rammer, a name synonymous with demolition and quarrying breakers, has recently launched the Pro Range. New to this range are two hammers: Rammer 2577 PRO and Rammer 5011 PRO. These have been specifically designed to work horizontally and undertake breaking duties in hard rock, being purpose built to withstand high levels of dust. The company states that the Pro Range is as innovative as it is tough, being designed for carriers in the 21-32 and 43-80 ton range, respectively. Both the new Rammer models possess such well-known Rammer features as an idle blow protector that works regardless of working mode to provide greater levels of protection. Additionally they are equipped with long life, high tension VIDAT tie rods for improved reliability, which is said to deliver extended service periods and lower operating costs.

Rammer has also been at the forefront of dust control advances for its range of hydraulic breakers and demolition attachments.  For hammers, the company has developed a special water jet system which is designed to suppress airborne materials or dust during hammer operation. The Rammer water jet system consists of a hydraulically driven water pump, and specially designed hammer housing equipped with necessary spray nozzles and water supply lines. The hydraulically driven water pump is powered by either the hammer supply circuit or from another high pressure hydraulic source from the carrier. Depending on the installation, the Rammer jet pump is activated by either the operator or automatically in conjunction with the hammer operation.

Montabert has recently launched two new heavy rock breakers, the V6000 and the V7000, which weigh six and seven tons respectively, completing the company’s range for carriers up to 120 tons. These breakers are said to be exciting developments, as three patents have been filed for the two new breakers. The first is related to the hydraulic cushion and piston centering, with the other two being linked to the new variable energy adjustment system, which enables them to adapt striking energy to the hardness of the rock. Other new technology has been incorporated in the design, including a dual lubrication circuit with breakers having been specifically engineered to provide ergonomics and safety for the operator. Wear parts are easy to change and have been designed with weight limitations in mind. Noise levels have also been reduced to minimum levels, using a soundproofed housing.

Continuing its strategy of identifying, evaluating and delivering new product innovations that provide quantifiable business value to the construction and demolition industries, Indeco North America has recently introduced its latest line of fuel saving hydraulic hammers. The HP Series of FS (fuel saving) hydraulic breakers has been specifically designed to achieve faster breaking results on rock, concrete, coal and frost, proving to be ideal in demolishing city buildings, excavating road tunnels, mining aggregate, removing slag from blast furnaces or performing highway maintenance. It features an upgraded “intelligent” hydraulic system that incorporates fuel saving technology enabling the hammer to automatically adjust the energy and frequency of its blows according to the hardness of the material being demolished. This optimizes the hydraulic pressure delivered by the machine, improving jobsite productivity and enhancing overall machine performance.

Some of the most interesting recent breaker developments have been regarding hydraulic breakers and demolition robots. Brokk has recently updated its range, producing solutions that have proven to be ideal for use where it is often hard or dangerous for human operators to go. One reason for this is as well as traditional applications, the Swedish manufacturer of demolition robots is finding its equipment is suited for tunneling with the robots being mainly used to excavate cross passages between twin tunnels, safety niches, TBM launch chambers and the enlarging of existing tunnels. The wide product range has proven to be particularly suited to working in confined spaces due to their electric operation and small size, which provides users with maneuverability on-site enabling access to the most confined spaces.

An interesting development has seen Brokk introduce its own hydraulic breaker series — the company has in the past relied on Atlas Copco breakers. The range is comprised of a full line up of eight breaker models perfectly matched with its range of demolition robots. The new series starts with the 50 kg light BHB 55 breaker designed to be used with the compact Brokk 60 demolition robot, and goes up to the 700 kg heavy and powerful BHB 705. The latter has been purpose developed for the recently introduced Brokk 500 and Brokk 520D demolition robots.

Further enhancing its offering, Brokk has added three models to its equipment range: B110, B120 (MkII) and the larger, more powerful B280. These new developments possess increased power and productivity, improving performance by approximately 50 percent over the last five years, without sacrificing any reach or versatility. One of the latest models, the Brokk 280 has a reach of 6.2 m and a weight of 3,150 kg and possesses a harder punch from each blow of the breaker and more blows per minute. The manufacturer states this is accomplished without sacrificing any of the compactness and flexibility that Brokk machines are known for.

Another development also found on the Brokk 280 is its all-new electrical system — Brokk SmartPower™. The new intelligent system optimizes the performance of the machine based on factors such as the quality of the power supply and the environmental conditions in which it operates. In addition, the new system is designed specifically to deal with the harshest of working environments. 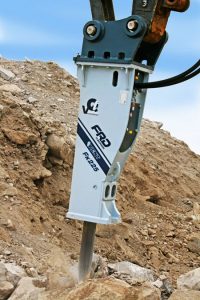 Furukawa Rock Drill USA has introduced its latest large series model, the Fx225 Qtv hydraulic breaker, which includes a number of significant developments. The hammer is designed to help improve day to day performance, provide less maintenance and downtime, smoother operation, superior strength and the highest level of reliability. The Fx225 Qtv itself is a 4,250 impact class breaker engineered to operate on 21 to 26.5 ton excavators and now comes with improvements to the internal grease routing in order to provide more direct lubrication to select components, with inline grease fitting for easier access. The relocation of the air inlet for the patented dust intake prevention system allows it to take in air from the top of the breaker, creating a dust free environment for cleaner, more reliable operation.

Furukawa has also launched a new small series breaker — the Fxa Series. The Fx15a/25a/35a Series and the Fx45a/55a Series incorporate design innovations to three internal components: the piston, cylinder liner and seal retainer. The Fx45a and FX55a breakers are configured for numerous mounting options (pin on and quick hitch adaptable) that allow fast and easy change between skid steer loaders and mini excavators. In addition, another new development has been released, being a new mid-size hammer suited for backhoes and mini excavators in the 10 to 15 ton carrier range. With two unique configurations, the Fx125 series is engineered to handle larger and more demanding materials.

Atlas Copco recently split its construction business into two distinct companies enabling each to concentrate on specific segments. Power Technique, which is more focused on the “lighter” requirements of the construction business, has launched a new RTEX handheld pneumatic breaker that has been designed to deliver savings through reduced energy consumption while still achieving high breaking efficiency, with the breaking capacity of a 30 kg+ pneumatic breaker but only using half as much compressed air. Combined with being 25 percent lighter, RTEX is setting new standards for pneumatic technological innovation. Thanks to the invention of a new operating principle known as “Constant Pressure Control,” the RTEX offers a 50 percent reduction in compressed air consumption for the same breaking capacity. This means that a compressor only half the size is needed or two breakers can be used on a compressor which previously powered just one breaker resulting in lower investment costs in the compressor, reduced fuel consumption, easier transportation and lower emissions.

Atlas Copco’s Epiroc division caters to the “heavier” end of the business including developing and supplying equipment for quarrying, tunneling, demolition and so forth. Its SB hydraulic breakers are said to feature the industry’s only integrated water port for dust suppression, which can assist with meeting the requirements of OSHA’s final silica rule. Its integrated water channel means that operators can spray water at the source of dust creation to keep levels down. This improves the working environment, enhances visibility and prevents dust from seeping into the bushings. The breakers are also designed to protect operators and equipment by reducing noise and vibration.

The SB series breakers are designed for the 0.7 to 24 ton carrier class and are used in a wide range of applications that include demolition and renovation work, construction projects, tunneling, dredging and pile driving. Mining and quarrying applications range from overburden removal and scaling to primary and selective rock breaking. The breakers are said to combine efficiency and performance with high durability in a compact design. The range includes models to match any micro or mini excavator, backhoe, skid steer loader or demolition robot with service weights ranging from 120 pounds for the SB 52 (the smallest breaker of the SB series) to 2,350 pounds for the SB 1102.