Blue Machinery (Scotland) Ltd have been appointed as the MDS distributor for Scotland and the North East of England.

MDS – A Terex Brand is a leading manufacturer of heavy-duty rock trommels and conveyors. The company which was acquired by Terex MP back in July were originally founded in 1995 and over the last 25 years MDS have built a valued reputation for innovation, offering bespoke solutions to serve client needs with equipment that can withstand the harshest of environments.

Blue Scotland become the second Blue company to become a dealer for the MDS brand in the UK, with Blue Central having taken on the dealership within the North West and Central England. Blue Machinery Spares will become the authorised parts provider for the MDS product ranges within the area in which Blue Scotland operate. The next/same day delivery offered on the vast majority of parts, paired with Blue Scotland’s network of industry leading field service engineers, MDS customers will be able to benefit from minimised downtime on their machines. 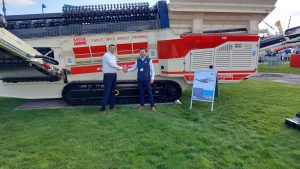 Austin Carey, Managing Director at Blue Machinery Scotland comments: “Blue Scotland have had previous experience selling MDS rock trommels in the Scottish market. We felt that the recent acquisition of the business from Terex will result in further development of the product range. We see lots of potential applications in which these products can excel in, including overburden processing, rock armour, primary screening and inert materials. We have some demonstration machines on order and we will be showcasing these machines to our customers in the Autumn”.

Raheel Qamar, Sales & Marketing Manager at MDS commented: “Blue Scotland will be key to strengthening our product offering in the Northern region of the UK and Scotland. This is an exciting partnership, with the local marketing knowledge and existing sales network, Blue Scotland will provide local support to the MDS customer base.”

As part of Blue Scotland’s introduction to the MDS brand, they exhibited an MDS M413 3-way split Trommel at the Scotplant show at the Royal Highland Centre April. 22-23.