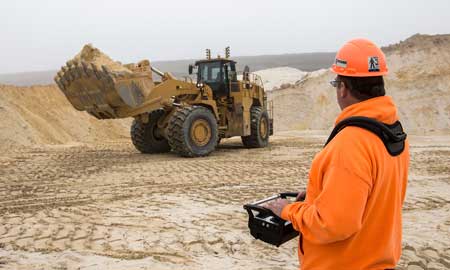 The major players in the world of autonomous mining applications thus far have been Komatsu and Cat©. With the purpose of automating the haul cycle, exploration into the current technology began over 30 years ago. The dream of “driverless” hauling has become a reality and the technology has taken the natural progression of being applied to other mining-application equipment.

According to Cat Autonomy Technical Steward, Craig Koehrsen, Caterpillar began their autonomous journey in the mid ‘80’s by experimenting with GPS mapping when public use of GPS was still in its infancy. 1989 saw their first prototype being deployed at the Tucson Proving Grounds, and by 1994 Texas Crushed Stone had become Cat’s first customer to run an automated truck in a mining application. Between 1996 and 2008 Cat went from their first MineExpo autonomous demonstration to promising customers the reality of autonomous mining. Today, Fortescue Metals Group (FMG) operates 20 autonomous Cat trucks within their fleet at the Solomon Hub mine with plans to double the number in the near future.

Komatsu claims to be the first manufacturer to commercialize Autonomous Haulage Systems (AHS) in the mining industry. Earlier this year, one of Komatsu’s largest AHS customers — with a 20-year working relationship — Rio Tinto in Australia reached the milestone of moving its 1-billionth ton of material with its fleet of autonomous haul trucks. According to an article on Mining.com, Rio Tinto explained that since they began AHS trial operations in 2008, there has been zero injuries attributed to AHS equipped haul trucks.

Rio Tinto’s fleet of 400 haul trucks includes 80 autonomous units, with plans to retrofit 48 existing Komatsu and Caterpillar haul trucks during the next couple of years.

AHS uses pre-defined GPS courses to navigate the ever-changing haul roads and intersections within a mining operation. Vehicles are also armed with obstacle detection systems and a wireless network system that allows them to interact safely with and around other equipment, which is also part of the autonomous system. Operations are programed and controlled in command centers filled with state of the art computer, GPS and radar equipment, in some cases miles from the application sites.

Both the manufacturers and the mine operators claim many advantages to running the autonomous equipment — not the least of which is the safety value as noted by Rio’s zero injury record. Other benefits include an increase in production (running the mining operations around the clock), efficiency (no driver fatigue or personal breaks) and reduced operating costs by reducing fuel consumption and extending tire and brake system life.

Below we will take a look at recent achievements within the world of autonomous and remote controlled equipment.

Cat® Command for loading enables line-of-sight remote control of Cat 988K Wheel Loaders. The new system reduces the risk of injury and enables production to continue by allowing safe operation of the loader in potentially hazardous environments. Command for loading is available as a retrofit kit for 988K machines in the field.

The system features a compact control console supported by a comfortable shoulder harness. Ergonomic controls, common with the controls in the cab, give the operator full access to primary machine functions. The controls are integrated with machine electronics to provide the same control and response as if operating from the cab, allowing the operator to maintain productivity from a distance. Advanced options such as Autodig are also accessible from the console. The portable console allows an operator to maintain line-of-sight control of the wheel loader from as far away as a quarter mile (400 meters).

Full integration of Caterpillar electronics enables notifications of critical machine health parameters and the activation of several safety features to ensure that the operator remains in control of the machine at all times. For example, a machine shutdown will be activated if an off-board transceiver loses power or if radio or on-board communications are lost. A shutdown also will occur if the operator console is tipped more than 60 degrees, which could indicate that the operator has fallen. Any manual stopping of the machine results in application of the parking brake.

Command for loading is well suited to activities such as highwall and edge operations, stockpile feeding, and working on slopes and unstable surfaces or around hazardous materials. The system also allows access to valuable material that may be considered unsafe to extract with the operator aboard. Having a remotely operated loader on site can be the difference between continued production and a full stop.

Command for loading includes rugged onboard components that are sealed to keep out dust and moisture. Exterior components are housed in steel enclosures to protect from damage. The roof-mounted electronics enclosure houses the antenna, indicator lights and wireless receiver. Different colors of LED lights clearly indicate machine status for everyone in the area.

The remote console and on-board transceiver utilize spread spectrum technology to virtually eliminate interference from other wireless devices utilizing the 900 MHz or 2.4 GHz frequency bands. Proprietary algorithms secure the communications between the onboard wireless receiver and the console, preventing communications from unauthorized devices.

Cat remote control system for dozers recently became available for the D8T Dozer. Command for dozing enhances safety and efficiency by enabling an operator to control the dozer nearby using a compact, portable console or a comfortable operator station. With the addition of video and sound to the system, the remote operator station can be used in a distant location. Deep integration with Cat machine systems enables smooth, precise control for superior efficiency and productivity.

The Command for dozing system is proven in thousands of hours of operating Cat D10T and D11T Dozers working at mines around the world. This same technology is now available for the D8T, a workhorse in construction and aggregates operations.

The over-the-shoulder console is recommended for short-duration activities such as cleaning up near highwalls and road cuts, stabilizing slides and working in any area that poses increased risks. Line-of-sight control distances can be as much as a quarter mile (400 meters).

The remote operator station enables the operator to work from a comfortable, seated position with familiar dozer controls—away from the active dozing area. The station promotes efficient operation in a wide range of site conditions.

The station itself is modeled on the actual cab of the machine, with all ergonomic controls, alarms and features operating as they do in the dozer. The system can be equipped for line-of-sight operation or for teleremote operation with the addition of video and audio feeds from the site and dozer. The design of the remote operator station allows it to be configured for easy transport in a truck or trailer, which adds flexibility in its application.

Remote operation allows dozers to be used in any situation that presents potential safety and health hazards. In addition to highwall and edge work, common challenges include steep slopes, pond and drainage operations, and aggressive ripping. Remote operation also enables a dozer to continue production immediately after blasting, rather than waiting for the air to clear.

In 2005, Komatsu began the AHS trial at CODELCO’s copper mine in Chile and succeeded in achieving the world’s first commercial AHS deployment with Codelco in January 2008. A second successful deployment followed in late 2008 at Rio Tinto’s iron ore mine in Australia and Rio Tinto currently operates AHS trucks in four mines in the Pilbara region of Western Australia. The entire AHS operation is controlled remotely and efficiently from Rio Tinto’s operations center in Perth, roughly 932 miles (1,500 km) from the mines. Following those successes of AHS deployments, Komatsu supported Suncor’s pilot of AHS in a section of their oil sands mine in Canada in 2013.

Today, the AHS operates around the clock, hauling three different commodities, in six mines across three continents. By the end of 2017, the AHS recorded a world-leading, cumulative total of 1.5 billion tons of hauled materials. In the area of safety, AHS is significantly safer than in conventional mining environments where even a small truck driving error could cause a serious accident. AHS-enabled customer productivity has improved, reducing load and haul unit costs by more than 15 percent, compared to conventional haulage methods. In addition, the optimized automatic controls of the AHS reduce sudden acceleration and abrupt steering resulting in 40 percent improvement in tire life compared to conventional operations and the various benefits of AHS deployment also show the great contribution to reducing the environmental impact.

To extend the proven AHS benefits to operations with manned haul fleets, Komatsu conducted and successfully completed trials of its AHS retrofit kit at Rio Tinto’s existing mine in September 2017. The retrofit kit, mounted on a Komatsu electric drive standard truck 830E (nominal payload: 220 tons), enabled the truck to operate in autonomous mode. As a result, Komatsu recently received an order from Rio Tinto for 29 AHS retrofit kits, to be installed on 830E standard trucks currently operating at Rio Tinto’s Brockman 4 mine.

In addition to expanding the AHS retrofit kit to include other main models of Komatsu electric drive standard trucks, Komatsu is planning to enhance the AHS’s mixed-operation functions. The planned enhancements will enable manned haul trucks of any make to safely interoperate with Komatsu AHS trucks in a blended fleet operation. Under this initiative, Komatsu has committed to provide mining customers with AHS solutions that meet the growing demand for gradual transition from existing to fully automated mining.

Cat® Fleet tracks data across the entire mine site and automatically handles scheduling and assignment tasks, including refueling scheduling and shift changes. A capability set within Cat MineStar™, Fleet automatically provides reports and alerts in near real-time to pit managers for immediate response. Fleet works with all machines (regardless of manufacturer) and systems to measure, manage and maximize equipment operation and material movement.

Use of cloud-based computing technology and Wi-Fi connectivity offers an affordable and easy entry point for new Fleet users.

Caterpillar introduced a major upgrade, Fleet 5.0, in late 2017. The new version offers a number of expanded capabilities including Blending to Destination and Store and Forward for data handling during communications outages.

While Cat MineStar has always had a blending element, the new Blending to Destination feature expands blending capabilities to include wheel loaders and load-haul-dump scenarios. The new capabilities are designed to help blending operations run as smoothly and efficiently as possible.

Blending to Destination involves controlling the rates, grades and percentages of material to the crusher, stockpile or dump. This is done while simultaneously making the most effective use of mobile equipment given operational constraints (by assignment). Blending to Destination assists in delivering material as specified to the processing plant, maintaining acceptable grade and material homogeneity in stockpiles, and ensuring dump material conforms to design and regulatory bounds.

While the Store and Forward feature does not replace a well-maintained radio network, it helps ensure that minimum data requirements are met to enable the creation of cycle data in MineStar.