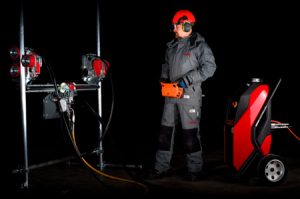 MONROE, WA — Aquajet Systems AB will launch the Ergo System in the United States at World of Concrete 2019. The robot offers four times the power of a hand lance in a compact footprint that contractors can easily move around the jobsite. It is ideal for work on floors, walls and ceilings.

Aquajet will showcase the Ergo System in booth C4249 at World of Concrete 2019 in Las Vegas.

The Ergo System incorporates: the controller unit, which powers and controls the hydraulics, the Ergo Power Head, which manipulates the high pressure lance, and either the spine or the climber, unique systems used to support and maneuver the power head, based on project needs. The climber attaches to any standard scaffolding pipes and robotically moves along it to deliver powerful hydrodemolition forces for vertical concrete removal and repair, such as high-rise construction.

The system exerts an impressive 1,000 newtons of reaction force, which is about half of the force employed by Aquajet’s largest hydrodemolition robot, the Aqua Cutter 710V. The robot can handle higher volumes of water, as much as four times greater reaction force than a human operator with a hand lance. This means the machine can remove concrete faster and easier.

Hydrodemolition robots, such as the Ergo System, remove concrete to a preset depth consistently. Alternatively, a hand lance will likely leave inconsistent depths due to being held by an operator. This means contractors may have to do another pass with handheld breakers to even out the surface.

“The Ergo System is the perfect package for a contractor looking to break into hydrodemolition or to expand their business,” said Roger Simonsson, Aquajet Systems managing director. “Beyond its robotic intelligent sensing controls — which help to keep workers out of harm’s way — the system offers minimal maintenance, and costs less than a third of a full-size robot. It’s an affordable option for contractors.”

Contractors can easily move the 271-pound (123-kilogram) Ergo Controller unit around the jobsite and over soft or rough surfaces due to the wide wheels and low ground pressure. At just 44 inches tall and 17 inches wide, the Ergo transports easily on a pallet.

Additionally, the system is also service friendly with hydraulic hose multiconnectors that are 100 percent sealed from moisture to virtually eliminate the risk of leaks during transportation.