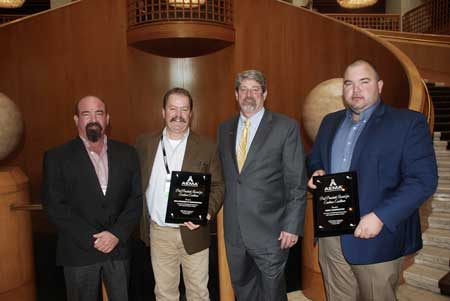 During the 2018 AEMA-ARRA-ISSA Annual Meeting, Feb. 20-23, 2018, in Indian Wells, CA, several awards were handed out in recognition of excellence and advancements in technology within the industry.

Matt Manthey, pavement management supervisor for the City of Mesa, was announced as the AEMA Recognition of Achievement Award winner at the 45th annual meeting of the Asphalt Emulsion Manufacturer’s Association in Indian Wells, CA, this past February. This award is presented to an individual who has made a significant contribution to emulsion technology or the advancement of the emulsion industry.

According to nominator Ryan Proctor, Ergon Asphalt & Emulsions, Inc., Manthey is an innovative resource in Arizona. He researches new products and looks for opportunities to prove their worth. Manthey is instrumental in selecting pavement preservation and recycling treatments, writing specifications and ensuring they are applied and constructed correctly.

In 2017, the City of Mesa constructed the Arterial Street Construction Project, which consisted of cold in-place recycling and cold central plant recycling on University Dr. and Southern Ave. This project was the first use of engineered solventless recycling emulsions in Arizona in more than 10 years, and the first recycling project in Arizona since an issue in 2016 that led to the reevaluation and temporary suspension of CIR and CCPR in the state. Manthey worked with Cass Cura and the University of Nevada to perform the mix designs and evaluate the project. Together, they ran Marshall mix designs, moisture resistance testing, dynamic module and rut resistance testing.

After Manthey assesses a new technique, he becomes an advocate for other agencies. He has worked to promote solventless emulsions for CIR across Arizona and in return made this project a success. Manthey continues to enhance the specification and will specify solventless emulsions in years to come.

Texas DOT, Kiewit Construction and Ergon Asphalt & Emulsions, Inc. were awarded the 2018 AEMA Past President’s Award for Emulsion Excellence for the Interstate 10 full-depth reclamation with asphalt emulsion project in Ozona, Texas. This award is presented in recognition of a specific project utilizing asphalt emulsions completed in the past calendar year and is awarded to the agency, the contractor and the emulsion manufacturer of the winning entry.

Four years ago, Interstate 10 had very little preventive maintenance done to it. So little in fact that, although the speed limit in that area was 80 mph, advisory speed plaques of 65 mph were posted. The pavement was very rough with IRI’s as high as 150 and alligator cracking was visible.

In July 2016, a project to perform full-depth reclamation on the east and west bound lanes of a 10-mile stretch on I-10 around Ozona. After visiting other pavement design professionals, the San Angelo District decided to use asphalt emulsion FRD instead of a cement treated base. The use of the emulsion treatment included benefits of moisture resistance and increase flexibility in the pavement.

With rain starting to fall and the pavement beginning to deteriorate during the milling process, TxDOT and Kiewit Construction needed to quickly think of a new solution to repair the pavement. Due to this section of I-10 built through a playa lake region with clay subgrades, TxDOT used an emulsion treatment. FDR was used to repair the outside and inside of the west bound lanes and the outside of the east bound lanes.

Kiewit Construction used two reclaimers to expedite the work, and after finishing the emulsion treatment process milled the treated base, laid 2” of hot mix on the driving land, seal coated the entire roadway and then overlaid with 2” of hot mix. The ride on this stretch of interstate was improved from an IRI of 151 to as low as 23, and speed limits were returned to 80 mph.

ARRA presented Bill Schiebel with the 2018 Richard E. Lowell President’s Award. This award is presented periodically, at the discretion of the president, to an individual who has, through long-term involvement, worked to advance the goals of the Asphalt Recycling & Reclaiming Association and to promote the growth and technological advances of the industry.

As the state materials and geotechnical engineer, a position from which he recently retired, he worked to successfully increase the statewide and western regional use of in-place recycling materials, directed CDOT research on the field performance and mechanistic-empirical properties of CIR pavements, and helped plan and deliver the 2014 and 2016 Western and International In-Place Recycling Conferences. In the 2015 and 2016 construction seasons alone, the Four-Corner State DOTs of Colorado, Utah, New Mexico and Arizona completed well over 1,000 lane-miles of in-place recycling projects.

Schiebel worked with the Western Workshop team to create and submit problem statements, which the AASHTO Standing Committee on Research accepted and incorporated into the $1M NCHRP Project 09-62, Quality Assurance and Specifications for In-Place Recycled Pavements Constructed Using Asphalt-Based Recycling Agents. Schiebel is a panel member overseeing NCHRP Project No. 09-62. Schiebel is currently working on delivery of the 2018 In-Place Recycling Conference and is a Senior Transportation Engineer with Rocksol Consulting Group, Inc.

Each year, via the ARRA Special Recognition Awards, ARRA recognizes public officials and consulting engineers who have made outstanding contributions to the asphalt recycling and reclaiming industry. Nominations are submitted by ARRA members and the ARRA technical committees review all nominations and select the award winners.
The first honoree was John McClelland, director of public works for Perth County, Ontario, Canada, named as the recipient of the 2018 Charles R. Valentine Award for Excellence in Cold Recycling. Nominator Bentley Ehgoetz of Lavis Contracting noted, “John McClelland is a true pioneer in our industry for faith in the process and innovative mindset to explore opportunities within cold in-place recycling. A testament to his dedication is an overwhelmingly 90 percent of his roadways have been recycled with CIR.”

Perth County has one of North America’s longest running in-place asphalt recycling programs and has been performing cold in-place recycling on its roads successfully since 1991. Out of a total 442 kilometer road network, approximately 90 percent has been remediated using CIR with average yearly workloads in the range of 15 50 20 km for a total capital budget of $4 million. The Miller Group completed Perth County’s first CIR project in 1991. Perth has completed a CIR project every year from then until today. Several of the early projects are still in service today with over 20 years of life.

ARRA next named William Johnson, commissioner of public works for the City of Atlanta, as the recipient of the 2018 Special Recognition Award for Excellence in Hot In-Place Recycling. The city of Atlanta, GA, has the typical agency problem of twice as much infrastructure issues than their budget will pay for.

Johnson quickly realized that recycling, specifically hot in-place recycling, with significant cost savings over typical mill and fill operations and substantial reductions in construction traffic, was the best plan of attack for the city. Their 21 miles of roadway slated for 2017, at a cost of more than $1 million, realized a savings of 19 percent under Johnson’s leadership.

ARRA’s final honoree was Robert Lee, the recipient of the 2018 Special Recognition Award for Excellence in Full Depth Reclamation & Soil Stabilization. During a 30-year career that includes employment with both industry (Koch Materials) and public agency (TxDOT), Lee has been both an expert in the application and champion of the utilization of many types of roadway stabilization and recycling. One area in which Lee has particularly helped advance asphalt recycling in Texas is his inclusion of “Report Only” testing in mix design specifications and ongoing post-construction evaluation of recycled roadways that has helped compile data and continuously improve the mix design performance criteria.

Retiring this year as the director of flexible pavements for the TxDOT, Lee’s body of work spoke to his qualification for special recognition by ARRA. Although deserving of recognition across many categories, Robert’s input and expertise which were instrumental in the drafting of the current Texas DOT specs for FDR and Base stabilization, hence his awarding in the FDR and Soil Stabilization category.

ISSA Excellence in Pavement Preservation Award – North America was awarded to Jackson County Roads, OR.
This award is presented to an owner, agency or engineering firm responsible for specifying and managing a pavement preservation program utilizing the applications represented by ISSA.

In 2017, Jackson County Roads opted to slurry seal eight collector sections, 54 residential street sections and the County EXPO parking lot, encompassing a total of 261,269 square yards, which would typically have been overlaid. Roadway pavement deficiencies included major block and alligator cracking to potholes, requiring patching and crack sealing prior to the application of slurry seal.

This project was the first time Jackson Country Roads had used slurry seal as a preventative maintenance option on its roadways or parking lot. The multiple streets and parking lots were also crack-sealed and blade-patched prior to application of the slurry seal. ISSA member contractor Blackline, Inc. used a Type II latex modified slurry seal mix design which were based off ASSTM and ISSA Test Procedures and Specifications provided for this project. Special considerations included safety, traffic control and notifications to residents, schools and business owners. This Jackson County Roads project exemplifies the key components of the beginning of a successful pavement preservation program.

ISSA’s President Award for Excellence was presented to Microsurfacing Contractors, LLC, for their work on IDOT Project No. 149 in Madison County (Illinois) on I-270.

The ISSA President’s Award was established to recognize those contracting achievements that best exemplify the highest quality of workmanship and materials, and conformance to best practices as defined by the ISSA.
Microsurfacing Contractors, LLC, used innovative solutions to meet project challenges including time constraints, shutdown due to a solar eclipse, and delivery of large amounts of aggregate and emulsion. At a cost of $4.8 million, the project scope involved 400,000 square feet of micro surfacing with an advance application of tack coat and 200,000 linear feet of crack seal.

Microsurfacing Contractors was able to shut down an interstate highway that services over 50,000 vehicles per day with a detour plan that was easy to follow, with no major traffic backups or incidents – successful even on a busy weekend with people traveling into town to view a total solar eclipse. Originally planned to occur over 5 weekends, they were able to complete the full project over the course of two weekends instead, with zero accidents or safety violations.

In a letter following the project, IDOT Region Five Engineer Jeffrey Keim noted, “One other thing that was an interest to the Department was your attention to worker and public safety … you provided a laborer at each closure throughout the 11.9-mile project. This was not required by specifications, but it was an excellent idea. The laborers kept motorists from going around barricades and gave directions to people that could not find their way through the detour routes. The Department liked this idea so much that we intend to add it to the specifications on similar future projects.”

Due to the success of this project, IDOT used this job as a “pilot-project” throughout the State to justify total interstate closures. IDOT is now adopting Microsurfacing Contractors, LLC innovative ideas into their specifications.