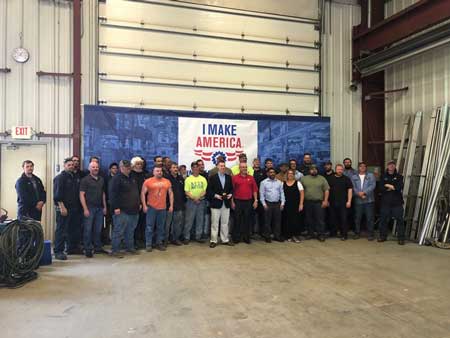 Asphalt Drum Mixers, Inc. talked with its U.S. House representative about issues important to the manufacturing industry during an “I Make America” event. Rep. Jim Banks toured ADM’s Huntertown, Indiana facility May 2, answering questions from workers and sitting down for a one-on-one conversation with company president Mike Devine. The conversation centered largely around the significance of manufacturing in America, specifically to Indiana, which has more manufacturing jobs per capita than any other state.

“It was an honor to host Congressman Banks at our facility,” Devine said. “We’ve always been proud to manufacture our products in America, and it’s important for our representatives to understand the impact of local manufacturing to the workforce and their communities. Because he’s serving his first term, this was an opportunity to communicate to the congressman how critical manufacturing is to his district.”

In addition to stressing the importance of manufacturing in America, Devine and Banks also discussed the need for infrastructure spending and the Highway Trust Fund, which Devine noted directly impacts many of the manufacturers in the district. Discussions included the significance of the North American Free Trade Agreement (NAFTA) to manufacturers that sell in Latin America, such as ADM. Devine and plant workers expressed concern regarding the new steel tariffs. Manufacturers that quoted projects prior to the tariffs are now forced to pay 30 to 40 percent more for steel than what was quoted to their customers. Talks also covered the impacts of the industry’s skilled labor shortage.

“It’s important that we communicate to the younger generation the value of skilled jobs and the high wages that often come with them,” Devine said. “We need to bring manufacturing jobs back to the U.S. Every new manufacturing job in the community creates four to five additional jobs with competitive wages. Too much outsourcing and offshoring has had a negative impact.”

Banks presented his platform to ADM employees before holding a question-and-answer session. In addition to the tariff discussion, workers also engaged Banks on questions related to the farm bill.

ADM invited Banks through the Association of Equipment Manufacturers’ (AEM) “I Make America” program. A press release on AEM’s website describes the program’s 2018 theme as “Behind Every Product,” which highlights the men and women who build equipment right here in America.

“Manufacturing plays a vital role in Indiana’s economy and provides good-paying jobs for many Hoosier families,” said Rep. Banks in the AEM press release. “I am proud to represent the most manufacturing-intensive congressional district in the country, and I am grateful for the important work of companies like Asphalt Drum Mixers and the Association of Equipment Manufacturers.”