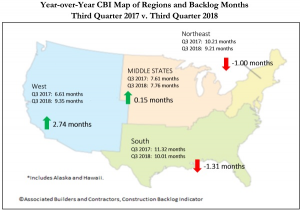 Associated Builders and Contractors reports that its Construction Backlog Indicator contracted to 9.04 months during the third quarter of 2018, down 8.4 percent from the second quarter and 4.3 percent lower than the same time last year.

“Construction backlog reached its highest level ever during the second quarter,” said ABC Chief Economist Anirban Basu. “While the third quarter saw average contractor backlog shrink, the indicator remains elevated by historical standards and remains above nine months for only the fourth time in the 10-year history of the series.

“That said, third-quarter declines were widespread,” Basu said. “On a quarterly basis, backlog decreased in three out of four major regional designations. The exception was the Middle States, where a surge in industrial production has helped bolster economic activity. 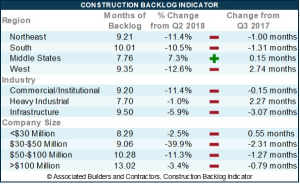 “Backlog in the infrastructure category fell below the 10-month threshold for the first time since the third quarter of 2015. This may be the result of a temporary expansion in infrastructure-related spending due to rebuilding efforts following natural disasters in parts of Texas, Florida, California and other states in recent years, as well as an ensuing reversal in the volume of new contractual activity, which is likely temporary. 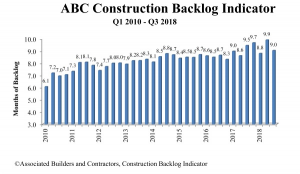