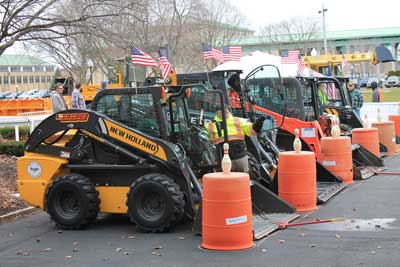 For construction contractors and industry professionals throughout New York and New England, one of the first signs of spring is the opening of the New York Hard Hat Expo. This year’s 32nd annual event will be held April 4 & 5 at the New York State Fairgrounds in Syracuse, NY. With more than 100 exhibitors expected to fill the Center of Progress building and surrounding outdoor spaces, the Hard Hat Expo is designed with the construction contractor in mind. Show hours for the two-day event run Wednesday 8 a.m. to 4 p.m. and Thursday 8 a.m. to 3 p.m. Parking is free.

The history of the New York Hard Hat Expo dates back to a time when there were a number of similar events hosted throughout the Northeast every year. Over time, these other events eventually discontinued their activities while the Hard Hat Expo continued to grow. Today, it has become one of the largest springtime heavy equipment shows in the East.

The Hard Hat Expo, produced by the trade show division of Lee Newspapers, Inc., publishers of RockRoadRecycle.com (formerly Hard Hat News), began as a much smaller show. According to one company official, the first shows displayed 50 or so exhibitors. The Hard Hat Expo grew as exhibitors and contractors learned of the casual yet informative environment. One that gave them the time and ability to get together and discuss the features and benefits of the exhibitor’s products and how they could help make the contractor’s jobs more profitable and safer. Additional building venues and outdoor exhibits were added to accommodate the growth. Through the years, the numbers of exhibitors increased, hitting around 200 at the peak of the construction cycle in the mid-2000s.

Since then, the show has weathered a couple of recessions, and it continues to attract vendors from across the U.S. National companies exhibit at the Hard Hat Expo as a way to acquire new dealers and customers alike. Often, companies introduce new products at the show. This year, with the strongest business economy in more than a decade, construction projects in both the public and private sectors offer new excitement to the industry overall.

Organizers say the early spring show dates have remained pretty much the same since the show’s inception. More recently, dates have been locked in for the first week of April. This regular timeframe helps exhibitors and attendees to schedule their calendars for the big event.

Hard Hat Expo draws between 4,000 to 8,000 attendees depending on the weather. Many of them often are in the position to make buying decisions for their companies or municipalities. “Sold” signs will often appear on equipment displayed at the Expo.

The Championship Skid Steer Rodeo is an attendee favorite. The popular rodeo event began between eight and 10 years after the first Hard Hat Expo. In the early days, this event was held as a backhoe rodeo.

The quick action and precision operation of the skid steers makes this event more popular with operators and spectators alike. Adverse weather conditions, when present, add to the excitement. This year, the Skid Steer Rodeo, sponsored by ADMAR Supply and RockRoadRecycle, will be held on Wednesday from 9 a.m. to 1 p.m. Trophies and prizes will be awarded at 2 p.m. in the ADMAR Supply Booth A1.

The New York State Fairgrounds is easily accessible from I-690 and is located at 581 State Fair Boulevard, Syracuse, NY 13209. For video clips of past events, visit the show website at www.hardhatexpo.com. Additional information is available from Show Manager Ken Maring at 1•800•218•5586.